A lot of coaches include the Olympic lifts in their program, but few go outside the traditional power clean. Those that due may include a snatch or jerk, but what is next after that?

I have outlined three key ways to improve both your programs and your athletes’ performance.

END_OF_DOCUMENT_TOKEN_TO_BE_REPLACED

I agree with Wil that when you begin to discuss Olympic lifting with coaches, red flags immediately goes up about concerns for proper teaching, concerns for safety, and the stigma that Olympic lifting is only for the highly skilled or older athletes. For those coaches I understand their opinion and will not argue those points. Instead I will pose the question, is there a way to achieve some of the benefits of Olympic lifting without struggling with the teaching challenges or putting athletes at risk for injury.

As I read Wil’s article I continued to see a strong correlation between the benefits of resistance band training and Olympic lift training. Therefore as a follow up to Wil’s outstanding article, I wanted to touch on all 5 of Wil’s key points and relate them back to how resistance bands could assist young athletes and coaches with “improving” Olympic Lifting skill sets.

Please note that I am not suggesting you replicate Olympic lifting with bands but rather that you can get some of the neuromuscular benefits of Olympic Lifting by training with resistance bands.

Elastic resistance is an ascending resistance that increases as the range of motion increases. As a result a young athlete quickly learns that in order to complete the movement using a resistance band they must accelerate out of their loaded posture. This mind set of acceleration is what not only recruits Type II muscle fibers, as Wil noted, but neuromuscular also teaches young athletes how to accelerate a force which is a key skill set necessary with Olympic Lifts.

Absorbing the force of the bar when receiving it overhead or at the chest requires the core to reactively stabilize in order for the body to maintain its center of gravity over its base of support and avoid excessive lumbar extension which can often be the case with Olympic lifts. This same reactive stabilization is seen when doing any type of horizontal vector upper body band exercise with the individual facing away from the band attachment site. For instance a simple horizontal chest press or overhead tricep press requires the core to reactive stabilize to avoid excessive lumber extension during the initiation of the concentric phase of the movement. Using bands to teach young athletes how to dynamic engage their core while performing an explosive upper body exercise with bands will neuromuscular replicate the core reaction needed with Olympic lifting.

Bands are rarely seen in a high school weight room being used to augment or help train movement skills. Instead they are used to simulate machine based movements or assist with body weight exercises like pull ups. One of the greatest benefits of resistance band training is its impact in proprioceptively teaching young athletes how to feel movement, train movement and ultimately store it into the body’s muscle memory bank. Once permanently embedded into the muscle memory, these movement skills will easily transfer into any other lift or activity that requires that particular movement skill like with Olympic lifting or more field specific foot agility training.

Resistance Bands are by no means a replacement for Olympic Lifts. However, incorporating them into a strength and conditioning program will not only allow coaches more training options but will also teach young athletes a skill set that could bring them closer to incorporating many of the movement skills needed to successfully implementing Olympic Lifts into their training program.

Special Thank You needs to go out to Wil Fleming for creating the original article on Olympic Lifting. ~ Dave Schmitz

On Monday July 11, the incredible Wil Fleming of Athletic Revolution will be joining me for a free educational event:

You can join us live (Monday at 7:30pm – EST) OR you can register now and enjoy the playback whenever it fits your schedule.

Click below right now to register for absolutely no charge:

Now, read this to see the depth of Wil’s knowledge of this subject:

END_OF_DOCUMENT_TOKEN_TO_BE_REPLACED

Jumping into the second step

The second step in our process is very simple. In order to teach the correct methods of activation at the hips, ask your athletes to jump again. This time with the bar in their hands, in a building block method cue the athlete to the start position and then cue with the simple word “jump”.  Using this simple switch word, the athlete will begin to extend the hips, within  moments of beginning hip extension a slight re-bend of the knees will occur. 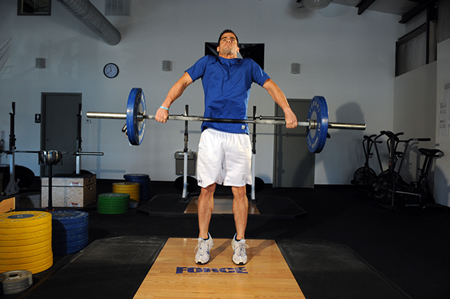 END_OF_DOCUMENT_TOKEN_TO_BE_REPLACED

On my first day with one of the dozens of high school athletic programs I work with, I rarely walk in and see a bunch of athletes snatching incorrectly. I also don’t have many athletes who come in to my facility for the first time and show technical issues with the snatch.

Well… this isn’t exactly the case. I rarely see issues with the snatch on Day 1 because most athletes don’t have any experience at all doing it since many coaches just don’t teach their athletes to snatch.

This will not be an article imploring you to teach your young athletes to perform a snatch or one of its variations.  Despite being one of the single best indicators of an athlete’s power output and a great indicator of future performance in power sports, even I keep it out of the programs of some athletes.

I am not here to be the pied piper of the snatch. In this article I am simply going to teach you an effective and simple way to teach the snatch to your athletes so that you will never have to exclude it because you aren’t comfortable teaching it.

The grip on the bar during the snatch can vary to a tremendous degree between individual athletes. A helpful rule of thumb is to have the athlete put their arms in a reverse scarecrow position: upper arms straight out from the shoulder, parallel to the ground, and the forearms straight down.   I think that it is important to have the athletes grip the bar using a hook grip (with their thumbs inside of their fist around the bar).

With that out of the way let’s get on to the meat of teaching the snatch to young athletes.

To begin with, we will need to select a starting point for the snatch. Floor? Hang? To a further extent, above the knee, or below the knee?  Well I think all are great at certain times in training, but for a starting point lets choose the above the knee, hang position.  I select that position for starting our teaching progression because it is highly applicable to nearly all sports. It is a position that most athletes can find fairly quickly and it also puts the athletes in a position to succeed quickly at this sometimes difficult lift.

So let’s get the athlete to this position! First, take the bar out of the athlete’s hands and just ask them to prepare themselves to jump as high as possible from a parallel, two-foot stance. Starting with the bar in hand the athletes will many times discover themselves in an unnatural position with their knees forward and their chest behind the bar. Without the bar in hand, I would be willing to bet that the athlete assumes a stance that is about shoulder width apart, or narrower, and automatically their head is up. This is contrary to the stance many athletes will take when you put the bar in their hand prior to this exercise.

As the athlete makes their counter-movement, they will most likely take their chest forward and hips back, with only a slight bend in the knees.  Often though the athlete will do this, but bypass this position and go slightly lower, increasing the bend in their knees.  If this is the case, slow down their pre-jumping routine to illustrate the actual position you want them to find.  The emphasis here is on the Hip Hinge being the primary movers as opposed to a knee bend.

Olympic Lifts are at the core of developing Power and Speed in young athletes.

Become the very best, most knowledgeable and well-known Speed & Agility Coach in your area through the incredible “Youth Speed & Agility Specialist – Level 1” certification.