A lot of coaches include the Olympic lifts in their program, but few go outside the traditional power clean. Those that due may include a snatch or jerk, but what is next after that?

I have outlined three key ways to improve both your programs and your athletes’ performance.

If you look at the training programs of elite weightlifters pulls are often included in many of them. The clean or snatch pull is a great movement to incorporate to the programs of your high school power athletes as well.

A greatly overlooked piece of the puzzle in many programs is the clean/snatch pull. The movement mimics the normal movement – same start position, explosive extension- but does not include the final rack position. This means that the movement can be used as an accessory lift to actually improve power by allowing the athlete to exceed the normal loads that they would use when required to rack that bar.

The Olympic lift pulls despite using greater loads should be used as a technique tool. The movement should focus on extension of the hips, and finishing through the toes. A correctly completed pull should go straight up and the athlete should feel on balance as their feet heels re-contact the platform. A common technical error is cleared up by doing pulls -incomplete extension of the hips. If the athlete does not finish with complete extension they will be pulled forward and will need to take a step to regain balance, this is easy to spot and easy to fix. Cue the athlete to pull through the heels and finish through the toes.

A common mistake among athletes doing the Olympic lifts is to catch the bar in an awkward, “Starfish” position. I know you have seen it, their feet are extremely wide, they are on the balls of their feet and they are extremely unstable. While a quick search of youtube will show you that there are some big lifts that have been completed this way, it is hardly the most efficient way to catch the bar, nor is it the safest. A simple correction can be made that requires absolutely no coaching from you. 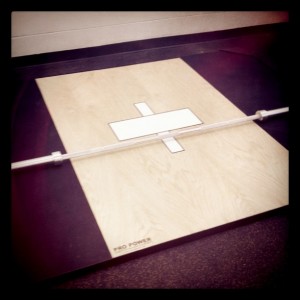 A Murray cross is a simple, but genius way to improve the technique of your athletes. By simply making two intersecting boxes you are able to give the athletes precise foot positions, for starting, for finishing, and for jerks. You can use tape to create the boxes, or have them painted on your platforms.

Using this method can give your athlete immediate feed back about the “correct-ness” of their lift. Feet landing outside of the box have landed too wide, feet landing forward of their start position means an incomplete pull.

3 is the magic number

One of the biggest mistakes I have seen in programming is too many reps when doing the Olympic lifts. Even those that see the inherent problem with doing high rep Olympic lifts, program set after set of 5 repetitions and month after month of programming at 5 repetitions. I too am guilty of this mistake.

The quality of movement needed to coordinate a great Olympic lift needs to be much higher than would be needed in normal strength movements (Bench, Squat, Deadlift, etc).

For the sake of clarity I have come up with a programming chart that looks like the one below.

Now that can get pretty boring if programming exactly like this for Olympic lifts, so to provide some variation we will use combo lifts (clean pull + clean) and complete 1+1, 2+1 to add some more volume in the lower rep ranges.

Using these 3 simple tips can really help your athletes get better at the Olympic lifts and be big time power producers on the field or court.