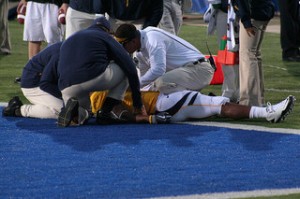 Sooner or later you’re going to get hurt. That’s what happens when athletes train hard and play intensely. But thanks to professionals like Erin Perry, young athletes are returning to action better and faster than ever before. Not to mention, her tips in this article will help you avoid injuries before they happen.

Erin is a sought-after athletic therapist in Toronto, Canada, specializing in pediatric elite athletes. She has worked with the women’s national soccer teams for 8 years, as well as the national gymnastics team, and regional teams including hockey, rugby, soccer, swimming, basketball, and volleyball to name a few. Erin also runs Developing Athletics Canada and the EOS Performance Institute.

Brian: Erin, can you tell us about the young athletes you typically work with and how you got into athletic therapy?

Erin Perry: As a young person, I was athletic, I enjoyed soccer, swimming, rowing, and skiing. I experienced some injuries, but it was the concussions that caused me to ‘hang ’em up’. I figured then and there that if I couldn’t be an athlete, that I would work hard to take care of other athletes in helping them realizing their dreams. Now I specialize in pediatric elite athletes both in clinic and field situations. Their development, training and treatment are my focus. So many injuries that I treat are preventable.

Brian: One of the most common injuries in female athletes is a torn ACL. What are your experiences in treating this injury and your thoughts on injury prevention?

EP: I am so happy that you asked. Most ACL injuries are what we call non-traumatic, which simply means that it is an injury that no contact was made in. For example, a soccer player running down the line with the ball, works to move the ball inside, and suddenly falls down while hearing a pop; an ACL tear. These are all preventable! The number one cause of these types of injuries is tight hamstrings. The three hamstrings should be stretched separately, and when tested in a straight leg raise, attention must be made that the findings are made with the pelvis remaining stationary. As soon as the pelvis rotates posteriorly, the test is negated. Most females have good straight leg raise range of motion, but have poor hamstring flexibility. The difference here is crucial. Normal is 80-90degrees. Please be tested, do the tests, and tell all of your friends and teammates, so that we decrease the incidence of ACLs! The other preventable cause is a muscle imbalance between the quadriceps and hamstrings. I will say that this is crucial, that the three hamstrings need to be strengthened again individually. Closed kinetic chain strengthening should be done all of the time, unless it is a rehab program.

Brian: Is the ACL injury common among all sports?