Coaching Young Athletes – We learn from the Best… 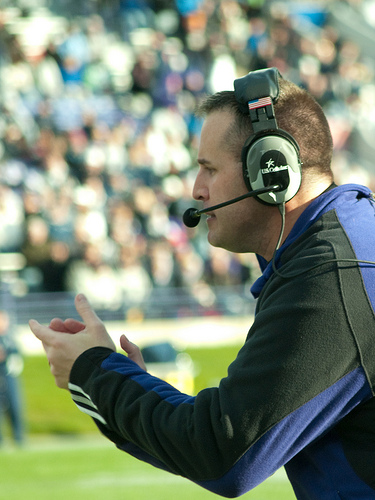 A quality Coach has a presence.

Not because they are dictators or aristocratic morons who feel compelled to proclaim their dominance, but because they simply have a commanding authority that is automatically respected and impossible to ignore when Coaching Young Athletes.

In my career, I have 3 Coaches who fit this bill perfectly  –

While with the BHS Broncos for 3 seasons, I came to admire and respect Coach Sanchez above any other high school Coach I had ever worked with.

Not only because he brought me on board his staff to do a specific job and didn’t feel it necessary to disagree, micro-manage or attempt to ‘bend’ my training programs to what made him more comfortable, but because his care for his young athletes was so incredibly evident; and his authority in the locker room absolutely undeniable.

He was not a ‘yeller’ (but had a booming voice).

He did not ever demean (however when addressing an individual or the team, full attention was always given).

He did not demand respect (although received it with 100% certainty).

day to watch, would know EXACTLY who was in charge.

Unlike Coach Sanchez, Carlo Alvarez is a high school Coach who has an international name and following.

He speaks every year at the IYCA Summit (including this coming 2011 edition) and works as a consultant for Nike.

But his own young athletes is where he spends most of his time and attention.

Again, an absolute commanding man who speaks with great authority, but softens it all with an honest look in his eye that never flinches away from who he’s talking to.

I believe that Coach Alvarez is among the very best I’ve ever known when it comes to taking scientific principles of training and applying them to systems for practical use, but to me, his true measure of greatness is based on his ability to communicate and lead a group of young athletes.

First of all, one of the classiest and nicest men our industry as ever seen.

Former Strength Coach for the New England Patriots, Chicago White Sox and Chicago Bulls, this man has seen and done it all.

But what inspires me every single time I see him present or enjoy a private conversation with him about training philosophy, is his unbelievable command and presence.

Last year, at the Perform Better Summit in Rhode Island, I watched a young attendee walk up to Coach Vermeil in the hallway to ask a simple question about lateral deceleration.

So naturally… I watched and hoped to hear part of the answer!

Inside of 5 minutes, this young man was receiving an answer that was worth $5,000 and coming from one of the greatest Coaches who has ever lived; and when I finally snapped out of my trance to look around, I realized that an audience had gathered – including both attendees and world-class presenters.

Roughly 40 people just stood there – watching him coach and explain.

But it wasn’t because of his answer, it was because of the WAY he was answering it.

A true coaching great, with an incredible coaching presence.

‘Part 3’ coming at you tomorrow…

But I Fixed Them With This: