Recently, a video was released of a cheerleading coach in Denver, CO forcing a 13-year old girl into the splits as she whimpered in pain, cried, and begged them to stop.  The coach was contacted by the media about the situation, and he said that it was a technique he learned growing up.

(Long pause to let that sink in)

If you’re up for a cringe, you can watch below.  Just remember that you can’t “un-see” this.

This video is difficult to watch because the girl was crying, asking for it to stop and making it very obvious that she was in a great deal of pain.  This girl may or may not have sustained serious or permanent damage and may have to live with the consequences for the rest of her life.  At the very least, she will have the memory of being forced into this pain, and held there against her will, for an extended period of time.

While this may be an extreme example of negligence and mis-treatment of a young person, there are certainly things that happen every day, all over the world, that fall only slightly short of this, and are rarely called out for their extreme negligence.

In fact, many uneducated, mis-guided coaches have young athletes do things that “they learned growing up” or “did when they were playing.”  These things may not always cause immediate damage, but may set the athlete up for long-term injuries. 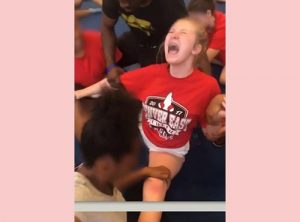 Think about the coach who wants athletes to get their names on a record board in a high school weight room.  They often allow kids to use inappropriate weights with terrible technique just to set a PR.

Squatting or deadlifting with too much weight can cause the spine to flex in such a way that disc herniation can easily occur.  This kind of issue can last a lifetime, and is sad see occur in young athletes trying to please a coach.  The same thing happens with Olympic lifts, overhead presses, RDLs and many other exercises.  It may not injure an athlete right away, or every time, but that doesn’t mean it’s safe.  Danger has a way of hiding and lulling us to sleep.

Not understanding how to properly teach, correct and enforce good technique has the potential to cause serious damage.  We usually don’t know what that damage will look like down the road.  It’s usually not as obvious or acute as the horrible video above.

Too often, these mis-guided coaches think it’s about them rather than the athletes they are lucky enough to work with.  They want to achieve success and prove they are great so badly that they’re unwilling to see the long-term ramifications of their actions.  Winning is certainly fun, but there is way more to coaching young athletes than just wins and losses, lifting heavy weights or doing the splits.

It was even more disturbing to watch the girl’s teammates participate in the mis-treatment.  Often times, a charismatic and/or overbearing coach will get vulnerable young people to buy in and become lackeys that go along with anything the coach does or says.  When something inappropriate is happening, kids look around, see their peers participating and start to question their own thoughts and feelings.  It’s the ultimate Jedi mind trick, and it’s very difficult for young people to speak up or assert themselves in these situations.

The psychological well-being of an athlete is something we should not take lightly.  And, while it’s difficult to point the finger at a coach who set an athlete up for injury, it’s even more difficult to quantify psychological or emotional damage.  Who knows what kind of impact that experience had on this girl and how it will affect her.

Again, most situations are not as obvious as this, but how many young athletes are turned off to sports/exercise by a negative interaction with a coach.  Young athletes are vulnerable, and they are usually put in a coach’s hands to have a great experience and build self-confidence.  Even a small negative comment can cause an athlete to lose confidence and/or interest in a sport.  Imagine what a situation like the video can do.

The IYCA community includes some of the best and most caring professionals in the industry, and we have an obligation to call out this kind of behavior when we see it.  Because we take education very seriously and surround ourselves with other quality professionals, it is sometimes hard to believe that this kind of thing still happens, but the sad truth is that it does.

This is exactly why we must continue to raise the bar in youth training.  Of course, we want to rid the world of methods like this, but we also need to rid the world of the less-obvious perpetrators.  Those coaches who over-train athletes, teach/allow poor form and are more interested in short-term gains than long-term consequences.

The Long Term Athlete Development model we espouse is not only about picking the right exercises at the right time or creating well-rounded athletes.  We must also remember that two of the most important goals for young athletes should be safety and long-term enjoyment of sports and fitness.  Of course we want to develop great athletes, but that only happens when the other two goals are also in place.

Hopefully this terrible situation forces us to remember that training young athletes is not about US….it’s about THEM.  As we focus on the latest and greatest training methods, it’s important to remember that their health, safety and well-being must always be a priority.