Almost without exception, every ‘sport-performance training center’ and youth sporting association in North America both markets and incorporates some degree of plyometric conditioning into the routines of the athletes they manage. More often than not, the trainer or coach prescribes an unintelligible series of jumping exercises and can be seen either holding a clipboard and a stop watch as they count and record the number of jumps or foot contacts a young athlete makes within a certain period of time, or barking out commands to the young athletes ‘jump higher’. Plyometric training has become such a ‘catch-phrase’ in the vernacular of trainers and coaches that it is often marketed as a sole measure of distinction for a training facility or individual coach/trainer. Do you know how many sporting clubs, for instance, have told me that they would love to have their young athletes train at my facility, but their Director of Coaching has a ‘plyometric class’ that he/she hosts every week and that’s all the conditioning they need?

Plyometric training has become watered down in North America to such a level that now even basic health clubs have introduced ‘plyometric jumps’ into their general group exercise classes as a means of achieving some measure of ‘high intensity’ training. Jumping and then abruptly stopping and holding a fixed position, jumping and then jumping again after a cursory pause or being taken through a series of jumping exercises without being taught proper execution of either the jumping or landing phases respectively are simply gross misappropriations of what plyometric training is or how it should be applied.

Originally called the ‘shock method’, this type of training is meant to increase the speed-strength aptitude of a given athlete (speed-strength is the ability to perform a quick movement which is either unloaded or against a minimal external resistance). A key ingredient to shock training is a short amortization phase, which is the time between the conclusion of the eccentric or braking phase of a jump or movement and the commencement of the concentric or acceleration phase (it is also often defined as the time from the beginning of the eccentric action to the beginning of the concentric action). Shock training is based on the creation of very quick eccentric and explosive actions during which stored elastic energy is released from the connective tissues housed within the series elastic components of a given muscle complex. Within the muscle complex, soft tissue is divided into a contractile system and a non-contractile system; the non-contractile system encompasses connective tissue including tendons, ligaments and capsules. This system subdivides again into the parallel elastic component, which includes fascia, and the series elastic component, which includes tendons. Ballistic stretching or fast, reactive motion has a greater impact in the series elastic component, thus its involvement in plyometric or shock training.

Of important note with respect to execution and prescription is that if the transfer from braking to acceleration takes longer than 0.2 seconds, than the activity would not fall under the parameters of shock or plyometric training. This is a crucial point considering that many trainers and coaches use ‘plyometric’ training to such an extreme level (i.e. increased number of reps and timed sets or decreased amount of rest between sets) that young athletes are simply not able to produce quick explosive and eccentric actions. Having said that, speed-strength is not being produced or improved. It is exceedingly decisive to remember that when training young athletes, the goal should not be to create as physically difficult a training session as possible. In fact, as with shock or plyometric training, the more physically challenging the exercise or training session is, the less you are actually improving the speed-strength capacity of the athlete – which is the reason you were offering plyometrics to begin with!

Shock training exercises can be divided into impact and non-impact varieties. With impact-based exercises, the rebound phase is inspired via contact with a surface while with non-impact exercises a recoil action is voluntarily performed. Shock training exercises can also be sub-divided into functional, non-functional and supplementary categories. Functional exercises are those which match a particular movement pattern and direction of motion for a given sport or action within a given sport, while non-functional exercises are more globally-based and do not necessarily work to improve a precise sporting action. Supplementary exercises can also be referred to as preparatory in that they aid in developing adequate muscular and connective tissue strength and movement aptitude.

A very concerning point to ponder when considering how wide spread the use of plyometric training has become in North America is that not every young athletes needs or will benefit from plyometric training! Due to the stretch reflexes involved, it is certainly accurate to say that shock training has a positive impact on neuromuscular power production and a far less influence on basic muscular strength or hypertrophy. However, even when traditional western periodized training methods are followed (which typically indicate ‘power’ training as a final phase), shock exercises should not necessarily be assumed to categorically enhance the sporting prowess of every athlete.

Force = mass x acceleration. With basic resistance or weight training, the mass portion of the equation increases whereas with plyometric or shock training, the acceleration portion of the equation amplifies. More over, shock training exercises incorporate a low level of inertial loading while resistance training involves a high level of inertial loading (inertial loading refers to the action of moving a mass in a short period of time). Although moving a weighty load with a small amount of acceleration or an insubstantial load with a high degree of acceleration can attain the exact same force, the training effect is quite dissimilar. Lower inertia training (shock method) influences the neuromuscular and CNS while high inertia-based training (resistance exercises) directly target muscular strength and hypertrophy.

To determine the specific needs of a given athlete and from which training stimulus they will benefit most (i.e. shock or resistance) one must determine the strength deficit of that athlete.

Strength deficit is defined as "the difference between maximum voluntary strength produced in a given action and absolute involuntary strength of which the athlete is capable in the same action." The strength deficit shows what degree of the maximal strength potential is not used in a given exercise or action. A rudimentary example would be contrasting the height reached in a vertical jump starting from a fixed, knees flexed position (which shows maximum strength) versus one in which the start included a quick recoil phase (which shows absolute strength). If the difference between the two results is minimal (10 – 15%) then shock training to target the neuromuscular system is warranted and would be well received. If the difference is large (greater than 25%), than resistance training to increase strength and hypertrophy is necessary. Unfortunately, ignorant coaches and trainers continue to conduct plyometric classes and training sessions without first assessing their athletes needs. This blind practice serves to both limit potential performance and potentially lead to injury.

This is not to say that appropriate amounts of jump training would not aid in preparing young athletes for their respective sports – after all, jumping and landing are movements involved with virtually every sport. The key, however, is to teach proper elements of jumping and landing as skills with the intent of developing lower leg and hip strength/durability. 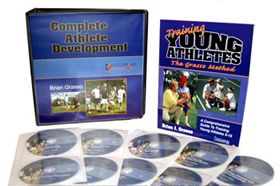 Learn the correct and powerful methods that have proven successful on more than 15,000 young athletes worldwide:

You get it all in the groundbreaking "Complete Athlete Development" system

“I received my copy of Complete Athlete Development a few weeks ago
and so far am LOVING IT! The material is blowing me away!”