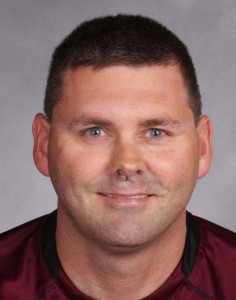 Time management in high school football training is always a big issue. In fact, when working with large groups of athletes in any sport, we are always limited in terms of time and space. This is especially true in high schools, where several teams are competing for time in the weight room after school. High schools usually don’t have the luxury of scheduling teams in the weight room during the day or late into the evening. Therefore, coaches and athletes must make the most of the time they get in there, which is typically about an hour or so after the school day ends. By their nature, coaches are constantly doing everything they can to make the most of their time—high school athletes, on the other hand, not so much.

I’ve worked with the football team at my high school for around five years. Through trial and error, the head football coach and I have come up with a system of time management in high school football training, which I’ve carried over to the other sports I work with, that holds them accountable for getting the required number of sets and reps during the lifting session, while at the same time leaving little or no time for them to lose focus and goof off.

In our weight room, we have a 3-foot by 4-foot timer that we use to time our various stations. In our current mesocycle, we set the timer at fifteen minutes and it counts down to zero from there.  There is a horn that sounds to begin and end the “quarter.” The football team uses that term to stay in a football mindset. Below is our current Monday/Thursday lifting routine. We also lift on Wednesdays; however, the lifts are different. The four “quarter” concept is still the same.

In general, we have four people in a group, and four groups at a station, which allows us to work with up to 64 athletes at a time. As you can see, the athletes must stay focused on the task at hand in order to complete 10-12 sets in 15 minutes.

Here is how the athletes rotate through the stations. In station one, one person is bench pressing as he is spotted on each side. The fourth person in the group is doing RDLs. The group rotates as the lifts are completed.  The bench presser moves to spot the right side of the bench. The spotter on the right moves to RDL, the RDL moves to spot the left side of the bench, and the spotter on the left moves to the bench press. This circuit must be completed five times in 15 minutes. Station two is completed in similar fashion. We like this approach because the athletes are recovering between sets as they are spotting and then performing a lift with an entirely different muscle group. Station three is completed in a separate room, and the athletes circuit the three lifts with the fourth lifter spotting the step-ups. Station four is run by another coach in our fieldhouse and consists of 15 minutes worth of various speed/agility drills.

Throughout the entire workout, our timer is prominently displayed in the weight room, and the athletes can see how much time remains in the “quarter” at any time. Because of this, they all know whether they are on pace or need to pick it up to get the lifts done in the allotted time.

I highly suggest this type of approach to time management in high school football training really for anyone who trains large groups of athletes at any one time—not just with football players. I’ve experimented with many different approaches over the years, and this one seems to work really well. I’ve tried giving the kids the entire hour to get the prescribed sets and reps of a workout done. From that, we found there was a great deal of time spent walking around and talking with each other. I’ve also tried the other extreme where I’ve used our timer and timed every set (say 15 seconds) and every rest period (say another 15 seconds) between sets. To me, that approach seemed overly micro-managed.

The best part about our current setup is that it keeps our kids engaged and motivated. It gives them a sense of urgency as the clock ticks down. They know what the expectation is during each quarter, and overall, we’ve had a tremendous off-season so far.

I’m fully confident you will find great success with a similar approach to time management in high school football training. Give it a try and let me know how it goes!