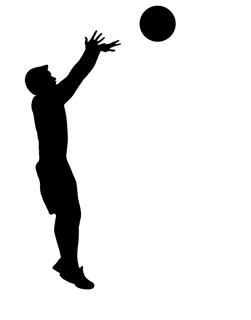 If you read my last post, you followed along as I walked us through the first three steps to consistent jump shot performance for a young basketball player. We discussed how the athlete should “catch,” “set,” and “see.”

In this installment, we will finish the jump shot skill set by discussing the other four keys, “dip,” “extend,” “flip,” and “crash.” As we discussed last time, it is likely ultimately more functional to further simplify this skill set into even fewer keys, however, for teaching purposes, the seven step approach will allow us to be highly specific without unnecessarily confusing the young athletes.

4. Dip: After the athlete has already caught the ball, set, the feet, and eyed the rim, he or she is ready to initiate the jump shot movement. This initiation begins with a quick eccentric dip of the hips to store elastic energy in the prime movers of the hips, knees and ankles.

Triple extension, in this instance, is preceded by triple flexion. The hips flex, the knees flex, and the ankles dorsiflex. From an injury prevention standpoint, it is critical that the athlete avoids valgus collapse at the knee. A clean, linear alignment without excessive movement downward is optimal. In order to maximize explosive output, the duration of the amoritization phase at the bottom of the movement should be minimized.

5. Extend: This explosive movement involves quick release of that stored energy coupled with a lift of the ball over head in good shooting form. The thoracic spine should move into extension as the ball crosses the level of the eyes and is lifted over head.

The dominant/shooting hand should do most of the work with the pads of the fingertips cradling the ball. The non-dominant or “off” hand should come along for the ride and stabilize the ball off to the side. The athlete should hold the ball release until the apex of the jump.

6. Flip: The wrist of the shooting hand should be held in full extension until the body reaches near the apex of the jump, then smoothly “flick” into quick flexion with a controlled but rapid motion, imparting a quick backspin on the ball as it leaves the hand s with an arc trajectory. Athletes are frequently taught to “flip the middle finger into the cookie jar” or the like as a way of teaching them to follow through with the motion. The flip should be smooth, with the 3rd digit (middle finger) left pointing at the intended target.

7. Crash: This step may be optional for some players. However, after the ball has been released, the player’s next task is to land safely, control downward momentum, and accelerate in a new direction. In the case of a guard, that may mean he or she hustles to get back on defense.

For a taller or more physical player, that likely means attempting to establish position in order to get a rebound for a missed shot. Whatever the case, the athlete must be cued to land with good knee positioning (no valgus collapse) and to avoid looking down at the feet.

While your approach may differ from mine, the key to skill setting is that it makes sense to you as the coach and that you can teach and coach using the approach in an effective way for your athlete. Whether it is teaching an athlete to shoot a jump shot, perform a power clean, or acquire any other skill, the approach is the same. Keep it simple, stupid.

Dr. Toby Brooks serves at the Director of Research and Education for the IYCA. Brooks is currently an Assistant Professor in the Master of Athletic Training Program at the Texas Tech University Health Science Center in Lubbock and is Co-Founder and Creative Director of NITROHype Creative.