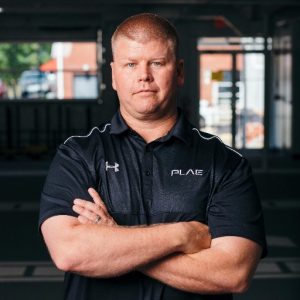 Ron McKeefery has become one of the most influential men in the industry by simply being himself and caring about people.  He has been a strength coach at the highest levels of football – University of Tennessee and the Cincinnati Bengals – as well as programs that he had to help create a winning culture – University of South Florida and Eastern Michigan.  He has also helped more young strength coaches break into the field than just about anyone through an outstanding internship program he created over 10 years ago.  He wrote the book The CEO Strength Coach a couple of years ago and is now the Director of Education for PLAE USA.

Even though he has done so many big things, it still all comes back to making a difference in people’s lives.

“I chose to be a strength and conditioning coach and why I love being a strength and conditioning coach is it’s a laboratory for life” explained Coach Mac in a recent discussion about how coaches make a difference. “Every single day, you walk in and you have an idea, you have a goal, you have a concept of what’s about to happen, but then all of a sudden you get smacked in the face with a tough workout, you know? And now you have to deal with adversity, you have to deal with success, and you have to work as a team, and you have to create energy when there’s none. What a better, it’s a microcosm of life. What a better laboratory for developing the skill set that you need to be successful after sport by doing that each and every day. So why would you every compromise those values to not reinforce that for their entire life?”

But, coaches can’t just start with crazy workouts and an abrasive attitude anymore.  We’ve learned that there is much more to being a strength coach than just lifting weights.

“I think I would go back a little bit further and start with your meetings with the athletes” McKeefery suggests. “Too many people don’t have 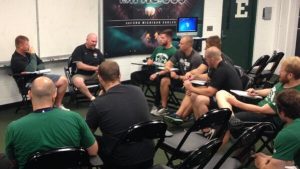 those initial meetings about why a kid is actually there. I call them WHY meetings. There’s a great book called Start With Why by Simon Sinek and there’s a good TED talk on it if you’re not into reading.  These meetings really help get down to the core of why they do what they do.  Maybe this is their only escape.  Maybe this is the only way that they see that they have a future. Maybe they just love being around people and interacting with people.  When you find out what their WHY is, you know the buttons to push. Just going up to a guy and saying ‘that bench press right there is not gonna get you into the NFL’ may resonate with them. He may not even care about that.”

Coach Mac went on to talk about how he handles different athletes when he knows more about them:

“If you know what their WHY is, then you find those little buttons to push as you’re walking around the room.  Some people like the public challenge. They like the limelight. They like the audience and the gladiator style deal. So, in that group you’re blowing the whistle and you’re getting everybody around and being loud when you’re talking to the guys so it brings attention. Then there’s other guys that don’t like that at all. They don’t like that attention but they want to know somebody cares about them. So, you put your arm around that guy so he knows you’re there for him. There are moments like that in every session where it’s almost like being a CEO.  Sometimes you have to run the entire room instead of just one squat rack.” 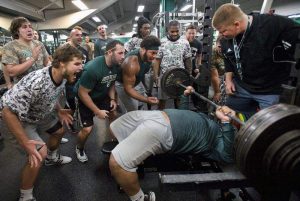 “I try to find touch points with every single person that’s in the room. That touch point may be putting my arm around a guy. The touch point might be play boxing with somebody. It might be cracking on this guy and it might be telling the next guy to come meet me after the lift so we can talk about home situation. But I find touch points with every single guy as I’m going through the room. By doing that, when they know that you care about them more as a person than as a player, then asking them to do things that are uncomfortable, which people don’t want to do in this society, you can do that.  You’ve been given that permission.”

Another interesting way Ron McKeefery gets to know his athletes is by asking them about their most challenging life experiences.

“Sometimes you’d be surprised what you hear when you ask about challenging life experiences. I had a player who watched his dad shoot his mom and then shoot himself right in front of him. He grew up in a foster home. And this kid, he’s a doctor now. You would have never thought. He’s happy, go lucky, smile on his face every day kind of kid. You would have never thought that this guy grew up that way.  And, I probably would have never found that out had I not asked him what’s the most challenging thing you’ve ever gone through. So, when you do those things, you start to find out at the core what is important to them, and then you can help counsel them, not just from an athletic standpoint but from a life standpoint.”

To get ever further into his relationships with athletes, Coach Ron McKeefery tries to create experiences for them.  Experiences they will never forget.

“When you create life experiences for kids, they hold you in a different light.  We’ve done all sorts of things, like taking them to the sand dunes on Lake Michigan, or shutting down the roads of a small town and doing a workout in the middle of the street.  After that kind of thing, when you’re asking them to give you another sprint, it’s not the guy that’s being a jerk with the whistle saying do it. It’s the guy that cares about me and he thinks that the sprints can help me. He believes in me. He’s investing in me.”

You don’t have to plan an elaborate trip.  You can create experiences right in your space by doing special workouts, bringing in speakers and having new experiences.

The IYCA philosophy of making an impact on people’s lives is one of the things that makes our community so amazing, and it’s great to see someone like Ron McKeefery placing such a high value on this aspect of the profession.

To get more Ron McKeefery in your life, listen to an interview with Ron McKeefery on The Impact Show podcast talking about making an impact through your business or listen to his podcast Iron Game Chalk Talk where he interviews coaches from all over the world.