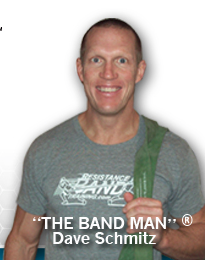 I agree with Wil that when you begin to discuss Olympic lifting with coaches, red flags immediately goes up about concerns for proper teaching, concerns for safety, and the stigma that Olympic lifting is only for the highly skilled or older athletes. For those coaches I understand their opinion and will not argue those points. Instead I will pose the question, is there a way to achieve some of the benefits of Olympic lifting without struggling with the teaching challenges or putting athletes at risk for injury.

As I read Wil’s article I continued to see a strong correlation between the benefits of resistance band training and Olympic lift training. Therefore as a follow up to Wil’s outstanding article, I wanted to touch on all 5 of Wil’s key points and relate them back to how resistance bands could assist young athletes and coaches with “improving” Olympic Lifting skill sets.

Elastic resistance is an ascending resistance that increases as the range of motion increases. As a result a young athlete quickly learns that in order to complete the movement using a resistance band they must accelerate out of their loaded posture. This mind set of acceleration is what not only recruits Type II muscle fibers, as Wil noted, but neuromuscular also teaches young athletes how to accelerate a force which is a key skill set necessary with Olympic Lifts.

Absorbing the force of the bar when receiving it overhead or at the chest requires the core to reactively stabilize in order for the body to maintain its center of gravity over its base of support and avoid excessive lumbar extension which can often be the case with Olympic lifts. This same reactive stabilization is seen when doing any type of horizontal vector upper body band exercise with the individual facing away from the band attachment site. For instance a simple horizontal chest press or overhead tricep press requires the core to reactive stabilize to avoid excessive lumber extension during the initiation of the concentric phase of the movement. Using bands to teach young athletes how to dynamic engage their core while performing an explosive upper body exercise with bands will neuromuscular replicate the core reaction needed with Olympic lifting.

Bands are rarely seen in a high school weight room being used to augment or help train movement skills. Instead they are used to simulate machine based movements or assist with body weight exercises like pull ups. One of the greatest benefits of resistance band training is its impact in proprioceptively teaching young athletes how to feel movement, train movement and ultimately store it into the body’s muscle memory bank. Once permanently embedded into the muscle memory, these movement skills will easily transfer into any other lift or activity that requires that particular movement skill like with Olympic lifting or more field specific foot agility training.
Foot Agility Training Video

Resistance Bands are by no means a replacement for Olympic Lifts. However, incorporating them into a strength and conditioning program will not only allow coaches more training options but will also teach young athletes a skill set that could bring them closer to incorporating many of the movement skills needed to successfully implementing Olympic Lifts into their training program.