Youth sport injuries are responsible for not only pain felt by an athlete, but also lost time on the field enjoying the sport, and in certain cases career-ending injuries. It is estimated that annually 12 million individuals between the ages of 5-22 will suffer a sport-related injury and result in 20 million lost days of school(1) and $33 billion in medical expenditure(2). This article will discuss overuse injuries in athletes that primarily affect the knees and ankles of young athletes – specifically the patellar tendon and extensor mechanism of the knee, and the Achilles tendon and plantar fascia of the foot. 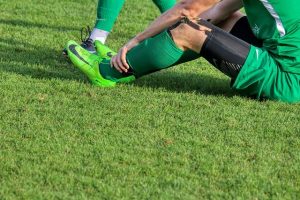 As a physical therapist, coach, and referee in both soccer and basketball I’ve worked with many athletes over the years with various knee and ankle issues. While I will include some information regarding certain medical conditions that can affect young athletes, it is not intended to serve as medical treatment. What I hope to accomplish is help coaches, parents, and athletes understand the relevant mechanisms which drive the development of these problems so they may be avoided.

What Makes the Young Athlete Unique?

The injuries I will be describing happen frequently in adults, but are called by different names which you likely know: patellar tendonitis, jumper’s knee, patellofemoral syndrome (PFS for short), Achilles tendonitis, and plantar fasciitis. Each of these problems (with the exception of PFS) is an overload of the attachment of tendons and fascia to their bony attachments. Because children are in the process of growing some of these attachments also include growth (epiphysial) plates which are the active parts of their bones which may be disrupted when subjected to either sudden or repeated excess tension. In extreme cases, surgery may be necessary to reattach the bone fragment.

The good news is that the treatment of these problems in both adults and youth is actually very similar. Rest, ice, and anti-inflammatory agents (NSAIDs, etc) all work, but these actions are only a small part of not only helping athletes overcome these problems, but also to help avoid them altogether! One component which I see overlooked or not addressed FAR too often are the biomechanical factors that contribute significantly to the overload of the painful tissues. Offending movements and activities are usually blamed such as running and jumping, but if the athlete’s movement pattern(s) is also causing increased stress is it really the activity that is to blame or how it is being performed? More on this later as we will first go over some of the more common youth overuse injuries in athletes. 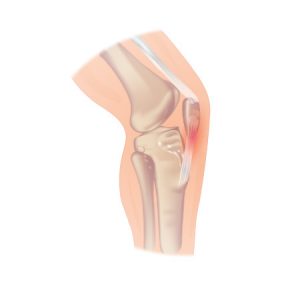 Athletes will typically complain of pain with squatting, stairs, jumping, and running. With OSD there will also tend to be significant pain when attempting to kneel on the affected side.

Rather than involving the patella tendon, this condition is actually an irritation of the cartilage lining the posterior surface of the patella as it contacts the femoral condyle. As with the above problems the athlete will report pain with squatting, jumping, etc. There may be audible crackling and popping (crepitus) with loaded knee flexion and extension, and one unique complaint is usually pain and a burning sensation with prolonged sitting. PFS is also a result of excess tension moving through the patella except that instead of the patellar tendon becoming irritated, it is the cartilage that breaks down. 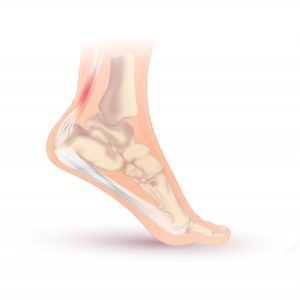 Like the knee problems above, Sever’s disease is a result of excessive and/or repeated tension generated by the calf muscles into the heel (calcaneus) via the Achilles tendon. In growing children, there is a growth plate which like with OSD can become disrupted and painful. If only the Achilles tendon is involved then it is technically Achilles Tendonitis.

Plantar fasciitis is caused when there is irritation of the tough plantar fascia where it attaches to the calcaneus (heel bone). Most often this a result of tight calf muscles, but weak intrinsic foot muscles as
well as biomechanical issues will also contribute to the overall loading of the tissue.

Tracking Down the Root Problem

While proper stretching is important (and you’d be surprised how many people are not stretching effectively), as mentioned earlier one of the most often overlooked factors is how the athlete moves. Almost without exception, the youngsters I’ve seen with these issues (especially the ones who have had one or more conditions for years, have been to PT, ortho, etc.) have significant movement deficits where they are not effectively using the hips. The net result is that greater force development and absorption demands are now required of the knees and ankles and causing the issue. Until certain movements are corrected it is much more unlikely that the problem will resolve; especially if the athlete is actively competing. This is where youth coaches can really play a huge role in helping athletes avoid these issues altogether.

What Movements are the Keys 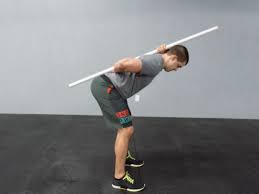 From the Barbell Physio

There are two movements that are essential in getting the hips in the game: the hinge and the squat. I want to see athletes hinge to 90 degrees of hip flexion with the knees slightly flexed. If an athlete cannot perform a hinge properly, then it is quite unlikely the squat will be correct. There are various methods to train these movements, however, I will share my favorite techniques.

For the hinge, my go-to technique is using a dowel along the back to cue the athlete into proper position. The dowel helps the athlete get the lumbar spine under control because if they allow the back to round, the dowel will lift up from either the upper back or from the sacrum. The goal is to keep a bit of wiggle room for the fingers at the low back. I’ll have athletes practice sitting down and standing up holding the dowel. Every now and again an athlete really struggles with this, and I will have them practice moving the trunk as a unit in sitting which eliminates the need to worry about the knees and ankles. Then they can progress to the squatting movement. 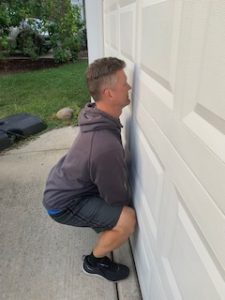 When it comes to the squat, the deficits are typically the knees moving forward excessively as well as moving inward. When they are allowed to move forward excessively this is what functionally creates the extra tension in both the knees and ankles as they are in a more flexed position. If a simple squat has deficits, then you can be sure that jumping, landing, and direction changes will have similar motion. My favorite exercise to correct the squat is the Chinese Wall Squat. It’s actually quite amusing to watch athletes attempt this! Have them stand 2-3 inches from a wall with feet forward and about shoulder-width apart. The goal is for the athlete to squat to maximum depth without touching the wall. The knees should not be allowed to flare out (a common “cheat”). The beauty of this exercise is that it absolutely forces proper form, and I’ve told many athletes that I don’t want to see them with weight on their backs until they can perform at least 20 reps of this exercise. It is acceptable for the athlete to stand further away to begin. One alternative I will use is to have them squat while facing a chair so that the seat is just over the toes which will prevent the knees from moving forward. This is easier because they are able to lean forward a bit more to focus on the knees.

I hope that this information helps you understand some of the most common overuse injuries in athletes and gives you some ideas on how, through training movement deficiencies, they can be resolved and prevented! I am currently filming and hope to soon offer an online program for parents, players, coaches, and trainers. The pilot, which has been live video calls with several families around the world whose children suffer from OSD, has been very well received with several athletes reporting significant improvement in their pain in under 2 weeks. 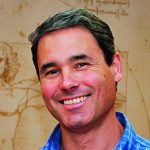 Jason Goumas is the owner and Director of Physical Therapy at New Direction Wellness and PT in Kentucky.  In addition to being an excellent PT, he is also a youth sports coach, referee, and a Certified Speed & Agility Specialist through the IYCA.  Jason prefers to treat injuries using exercises that can be done at home, and believes that education is the key to both rehabilitating and preventing injuries.  It is Jason’s mission to prevent overuse injuries in athletes.