Along the path to the NFL, I confronted many different forms of adversity. My journey was like many others who dare to achieve something rare. One form of adversity that I frequently faced was dealing with serious injuries. When I say serious injuries, I mean injuries that take at least six months of recovery.

Although serious injuries are physically and emotionally painful, it is important to remind your athletes that they can be excellent teachers.

My laundry list of serious injuries started in high school when I severely tore my left hamstring. It happened while doing jump squats. The hamstring gave way during the last set as I landed with 205 lbs on my back. My left hamstring immediately grabbed.

Instead of seeking medical attention, I fought through the sharp pain for months. The injury only worsened. Not until my explosiveness had diminished drastically did I finally see a doctor. It took me two years to fully recover from that hamstring injury. Imagine if I would have addressed it right when it happened. The recovery time would have been exponentially less. 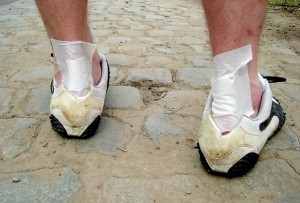 My second severe injury took place months before fulfilling my childhood dream of playing college football. After finishing a rep of power cleans, I lowered the barbell loaded with 265 lbs to the ground instead of just dropping it. Poor choice and form. I felt a pop in my lower back.

For the next few days, my only symptom was back soreness. All of a sudden, about a week after the incident, my left leg went numb. I was diagnosed with a herniated disc. Improper Olympic lifting form took me on a 6-month detour from prepping for my first year of college football.

My Third and Fourth Injuries

My third and fourth severe injuries were ACL reconstructions. The first one occurred in the fourth quarter, in week thirteen during my first start as a rookie in the NFL. The fatigue of over-training had caught up to me. As I was running down on a kickoff, I attempted to stop and redirect. Unfortunately, my overworked and fatigued leg muscles gave way when my left knee twisted awkwardly rupturing my ACL.

My second ACL reconstruction was somewhat of a mystery. While doing a minor operation on my left knee, the ortho observed that my ACL was a ticking time bomb barely attached by a small strand. We opted to do a full reconstruction to ensure the stability of the knee. Pushing it too hard led to 2 ACL reconstructions and 18 months of rehab.

Thanks to modern medicine and training, I fully recovered from all of my injuries—turning potentially devastating injuries into positive learning experiences.

Lesson #1: Listen to the body.

The body has ways of communicating. If your athletes feel an ache here or pain there, the body is indicating that “something isn’t right”. I’m not saying that any small ache or pain justifies sitting out. But learning “the why” leads to learning “the how” in recovery and preventing future problems.

For example, after having recovered from my first ACL, I began to have achilles tendonitis in that same leg from over using my calf muscle when I ran. I was taught that I needed to activate and strengthen my “glutes” in that leg to alleviate the stress off of that calf muscle. After making glute activation and strengthening a daily routine, my achilles tendonitis subsided. Properly troubleshooting aches and pains with the athlete goes a long way in fully recovering from and preventing injuries.

Lesson #2: If injured, physical abilities count for nothing.

Availability is the most important ability. That means when performance training, health is priority number one. Your athletes will need to feel good in order to play good. It’s not about how much weight your athletes lift, but how they lift that weight that counts.

For instance, performance training has become synonymous with Olympic lifting. The sport of Olympic lifting is extremely technical. Most athletes who are not Olympic lifters will naturally prioritize learning the skills of their sport over Olympic lifting—increasing the likelihood of poor technique and risking unnecessary injury. Why train for a sport with another sport?

Train your athletes like they compete while minimizing potential injury and stress on the body. There are a number of different alternatives to Olympic lifting that are more effective in developing sport specific skills and that are easier to learn, while minimizing wear and tear on the athlete.

Lesson #3: Rest is as equally important as work.

Resting for those who are strong workers can be challenging. But it is essential for optimal performance. A good night’s sleep is necessary in regenerating and re-energizing the body, mind and spirit. Tapering during the season, as I learned, is crucial. Counting a game as a high intensity workout can help in balancing the scale of rest versus work.

Injuries are a part of athletics. Not all injuries are preventable. They are a form of adversity that, if managed correctly, can work as springboards. It all comes down to empowering your athletes to learn from the injuries. That is key.

About the Author: Brady Poppinga

Brady Poppinga played in the NFL for eight seasons (2005 to 2010 Green Bay Packers, 2011 St. Louis Rams and 2012 Dallas Cowboys). Brady is a member of the 2010 Green Bay Packers Super Bowl championship team. After retiring from the NFL over three years ago Brady has reinvented himself as an inventor of the worlds first Omni directional smith machine.

Being bilingual, Brady made history by calling Super Bowl 48 in a purely Spanish production for the first time ever. Drawing from the training principles that he learned while playing football at the highest level, Brady has designed his own 20 to 30 minute high-intensity training program.