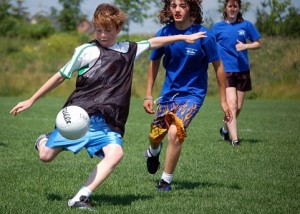 When it comes to athlete development, we need to be teaching our kids more than just strategy and technique. Indeed, it is imperative that we expose them to situations that can instill real life lessons. One of the most important character traits they can develop through sports is perseverance, but it can only happen if we are not too quick to protect and shelter our athletes but instead follow a long-term athletic development approach.

I’m not sure there is a better and more succinct statement about perseverance than the phrase, “Never give up.” It means that despite whatever setbacks or obstacles come your way, you may have to jump, crawl, scratch, run, and do whatever it takes to get through. It’s this attitude that establishes a winning mentality that will help you in every area of your life. How we teach our youth to handle adversity at a young age can have an impact on the way they deal with tough situations later in their lives.

I coach youth club soccer, and every year there are tryouts to determine the makeup of teams. The tryouts end up being something like the old playground pick-up games where someone has to have the stigma of being picked last. In this case, that would mean being selected for the “lesser” of the teams. It can definitely be a bit damaging to the psyche of an 11-year-old not to be picked for the “good” team, especially if the majority of his or her friends made that team. There are a variety of reasons why someone might be selected for a particular team, which could be an hour long seminar in and of itself, but regardless of what those reasons might be, we should use these moments as teaching points to encourage athlete development.

A lot of parents will step in and advocate for their child, which is the natural and normal thing to do. In fact, I believe all parents should want what is best for their children. However, I’m not convinced that being on the best team is really in the best interest of each child.

I prefer to take the long-term athletic development model approach when looking at these situations. Simply stated, this model for athlete development values the growth of the athlete throughout their entire career over the perceived value of playing for a prestigious team or club. Perhaps a young athlete might be better served on a different team where they’d have more opportunity to really master the essential skills of their given sport.

Let’s take soccer for example. Would a tentative child fare well on a team where every other kid’s first touch on the ball was better than theirs—so much so that they were nervous about messing up every time a pass was made in their direction? I know from experience that these players tend to kick the ball away as quickly as possible so as to not be criticized for making an error. How much benefit is that child receiving from being on the so-called good team? Not much if you ask me.

Now put that same child on a team where he or she is one of the faster and stronger players. They will likely feel more comfortable, and in this environment, they can work on developing the foot-skills that will help them at the next level. They will also get an opportunity to develop leadership skills. As it is said, you never feel the sun if you’re playing in the shadows. That is, until you’ve been called on to lead, you’ll never know what it means to inspire others with your actions, words, and demeanor. These are life lessons for both sport and the world outside it.

Giving up or quitting because an athlete didn’t get selected to a particular team is the last thing we should encourage (or even allow) our young athletes to do. There’s so much adversity in life, and youth sports should be an opportunity to face adversity in a less turbulent manner. Overcoming adversity makes victory that much sweeter. Think of Michael Jordan, who was cut from his High School basketball team. Instead of quitting, he worked harder than ever before to make sure he made the team the following year, and we now consider him one of the greatest athletes of all time. Soccer star Cesc Fabregas, who has now rejoined his boyhood club, FC Barcelona, was further down the pecking order than international stars Xavi (Hernandez) and (Andres) Iniesta both at Barcelona and in the Spanish National Team. Rather than give up the dream to play at the highest level, he took the opportunity to develop further at Arsenal, so much so that he became their captain. While not a starter for Spain during their 2010 campaign, he ended up making the assist for the goal that won the World Cup. He never stopped trying to improve and it certainly paid off.

If you work hard and persevere, you’ll be ready when that opportunity comes. Instead of encouraging our children to quit because we feel they’re being conspired against and engendering the belief that the world is a bad place because they’ve been picked last, let’s start looking for positives to take from the situation.

First, our young people are staying active in ways they can maintain for a lifetime. Second, if we remove these unnecessary stigmas attached to “good” and “bad” teams, they’ll have a lot more fun. Third, if your athlete is striving to make that better team, give them this opportunity to work harder and smarter to improve their game.

Let’s make sure we’re not getting in the way of providing young athletes the tools they need to become well-rounded citizens. This includes learning to deal with adversity, competition, and disappointment. When children learn that there is a lesson in every setback, they’ll learn to conquer any and all obstacles they face later in life.

I think that there are many great things children learn from sports, but mental fortitude is one of the most important for athlete development. We can teach our children to keep learning, to stay focused, to work hard, to play well with others, and to practice fairness. We can teach them about teamwork, respect for the game, and having fun while trying to win. But if they are going to get anywhere in this world, they need to learn one thing: No matter what life throws their way, no matter what unexpected things arise, they can find a way to win if they never, ever give up.