As a young athlete growing up, I played a lot of sports. I think a lot of people in my generation or older can identify with that statement. In the fall, you played football, volleyball, or soccer; in the winter, you played basketball or maybe wrestled or swam; in the spring, it was baseball/softball season or track season. In the summer, you played whatever—enjoyed baseball, played games outside, and were thankful that your neighbor had a trampoline! As the seasons of the year changed, the sport you played changed with it.

As a kid growing up, I just remember my parents putting me in every sport, I wrestled one winter (I hated it), I did gymnastics for 2-3 years, and I played all the classics. I can also remember crying before my first day of baseball, because I had to wear pants and not shorts (I was big into shorts for a couple years there). For the most part, if you asked me what my favorite sport was, I would say, “Whatever I am playing now.” That’s the way it was supposed to be.

As I grew older, I started liking one sport more than another (baseball was my favorite by age 10 until I was 14 or so), but I continued to play 3 or more sports through my senior year of high school. Only when I was a sophomore did I decide not to play some of my earlier sports (leaving basketball and baseball) but to pick up track and field and weightlifting full time. I remained a 3-sport athlete until I went to college.

It’s interesting to note that if you asked 10-year-old me what I would do later in life, I would have said be a baseball player, and I would have played it year round if my parents had let me, but by my sophomore year of high school, I was done with baseball. (I might be getting ahead of myself, but maybe, just maybe, even though the 10-year-old loves his/her sport, you might want to keep him/her in other sports until he/she is a little bit older.)

Maybe, just maybe, even though the 10-year-old loves his/her sport, you might want to keep him/her in other sports until he/she is a little bit older.

From my perspective, today’s young athlete is much different. Three sports or even two sports is not the norm any longer—this is the era of specialization.

When I use the term “specialize” I am specifically referring to early specialization, the practice of choosing a single sport before the age of 16. For most sports, this has been shown to be a poor choice, one that will even hinder an athlete’s development later in his/her sporting career. While there are exceptions—gymnastics and figure skating come to mind (highly acrobatic sports)—most other sports don’t require or even reward early specialization. Want some proof?

The image below shows the recruiting strategy of Urban Meyer, head coach of THE Ohio State University football team. It is a graphic representation of the types of athletes that his team recruits. While it may have been simpler for the illustrator to just write “THE BEST ATHLETES” rather than this, it makes a pretty clear point. He prefers or ends up recruiting more multi-sport athletes than recruiting football-only athletes. 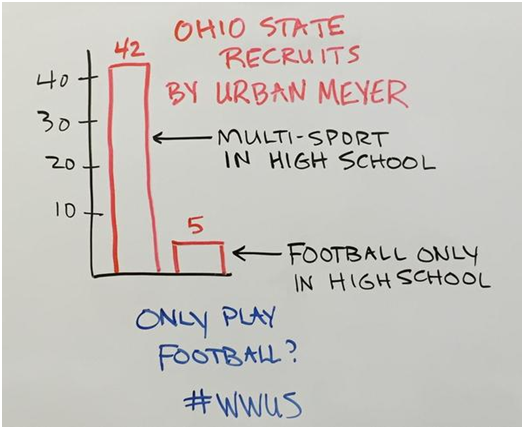 Here’s some more evidence against specialization: The United States Olympic Committee recently surveyed more than 300 US Olympians from 2000-2012 and asked them about their involvement in sports. Here is what they found as an average number of sports that these individuals played:

The implication in this sense is pretty clear: Up to age 14, most Olympians played 3 or more sports. Up until age 18, these athletes played 2 sports or more! The 12-year-old baseball specialist is going against the trend of the greatest athletes in the world.

A 2012 study published in the Journal of Sports Sciences shows that multi-sport male athletes at age 12 were found to have more explosive strength, better coordination, and better speed than those who played a single sport.

Anecdotally, I have spoken to dozens of college coaches who say they would rather have a multi-sport high school athlete to recruit because once they come to college and finally specialize, they will have a better opportunity to blossom.

Who is on the Side of Specialization?

With all this data, it should be a small group who are pro-specialization, but why do I see more and more athletes who are specialists at a young age? I’ve found that, in general, those in support of athletes specializing are those who have a vested interest in athletes specializing: travel coaches trying to fill a roster of paying individuals or high school coaches wanting to win. I don’t fault those individuals for wanting athletes to play, or even for a pay-to-play model, but I do fault them if they do so at the expense of a young athlete’s opportunity to play other sports.

With that pressure, and the extremely high payoff if a young athlete does make it, you can see why parents might allow it or encourage it, and athletes might think it’s the right path. However, it begs the question: What is the price paid if an athlete does specialize early and doesn’t “make it?” This is a much more likely scenario and one that has shown a much higher likelihood for overuse injuries, burnout, and quitting sport entirely.

The solution to this problem is Long Term Athletic Development, a model we follow at my gym. LTAD, or multilateral development, should expose young athletes to as many different experiences, movements, and skills as possible for as long as possible. LTAD has athletes learning a lot of skills, thereby increasing their physical literacy. Then they practice many sports, play many sports (practicing more than competing by a large margin), learn even more skills, and train holistically (movement, not muscular- or sports-based), all the while growing as much as possible. Then at age 16-18, the athlete can specialize and flourish.

Think of it as the schooling system. We go to school from age 5-18. During that time, we first learn the basics of math, reading, and writing. Then we add some science and social studies. Then we increase the difficulty a bit and add things like biology, chemistry, algebra, calculus, and literature. Then, at the age of 18, we go off to college and declare a major, a subject in which we want to become a specialist.

Imagine if we suggested to a 4th grader that it was time to declare their major and that all of their time would be spent learning biology (or calculus)? How would that young person turn out? I would bet we would say, “Wait, they won’t be well rounded,” or, “I’m afraid they will burn out.”

I’m the proud father of a son, and with respect to his future, the choice is really clear: I’m going to allow my son to play as many sports as he can for as long as he can. I’m going to encourage him to play as much as possible freely and learn LOTS of skills.

As the owner of a gym, my role changes a bit. Despite the overwhelming evidence against early specialization, I am not the parent of every athlete in my facility. Nor am I every athlete himself. My job is not to get you to play more sports, but it is to ensure that the athlete has a well-rounded movement ability. If they are specialists, then I must provide a rich environment that can encourage the overall development of their athletic abilities in the absence of other sports. This means athletes at Force train movements and not muscles, train in multiple planes, move on their feet often, and engage in free play when it is appropriate.

Gain access to Wil’s 5 Factors that enable athletes to go from good to great.