I get it.  You want your kid to be better at sports.  And, taking a lesson this week (hitting, shooting, dribbling, etc.) from a sports skills coach will produce a quick results so your child will experience success this weekend.  I have three boys who play sports, so I definitely understand where you’re coming from.  We all want our kids to succeed.

It makes logical sense: work on a skill + use it in a game = success & happy kids. 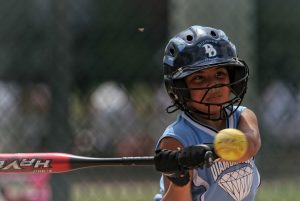 It seems easy, and it’s not necessarily wrong.  It’s just not a complete equation.

Make no doubt, working on skills will help.  A good coach will help a soccer player pass, trap, and dribble better.  A good hitting coach will refine your swing and help you get more hits. And, a good volleyball coach will help you serve, bump, and hit better.

It will definitely help…to a certain extent.

Just remember that improving sports skills does not necessarily mean that their overall athleticism is improving.  These two things are very intertwined, but also very different.

Just so we’re on the same page, “athleticism” refers to things like body control, speed, coordination, balance, quickness, kinesthetic awareness, and the way a person moves.  Sports skills are all about technical expertise at skills like dribbling, shooting, hitting, etc.  Being more athletic makes it much easier to learn and master sports skills, but being good at sports skills does not necessarily make an athlete more “athletic.”

The traits involved in athleticism lay the foundation for most sports and are typically developed before age 14. They can certainly be improved well beyond age 14, but it becomes much more difficult to change the way an athlete moves as they get older because motor patterns (the way our nervous system organizes firing patterns to create and control movement) are more ingrained at this point.   A young person’s nervous system has much more “plasticity” which is essentially the ability to change, adapt, and learn new skills. This is also why it’s usually easier for young kids to learn a new language. 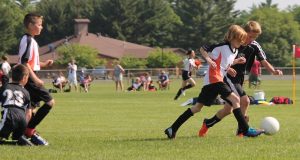 A highly athletic, low-skilled soccer player can easily get into position to make a play, but may not be able to take full advantage of the opportunity because of the low technical skills.  On the other hand, a highly-skilled, low-athleticism player can control the ball, but won’t be able to get into position where their skills can best be utilized.

Athletes who have both traits have a very high ceiling.

Both traits can be improved, but it is much harder to develop athleticism later in life than it is for a good athlete to improve skills.  In fact, many world-class athletes didn’t focus on their “main sport” until after age 14, so there is plenty of evidence showing that “good overall athletes” can develop great skills later (there are certainly exceptions to this, but I’m not trying to cover every aspect of every sport in this short letter).  While good athletes can pick up new skills later, the opposite is not true.  A young, highly skilled, low-athleticism athlete will often get passed up when highly athletic kids start to practice their skills.

Getting passed up is frustrating for everyone, and is often the reason kids stop playing or enjoying sports.  It’s the result of short-term development, and it’s much more difficult to address later in the developmental process.  That’s why it’s so important to spend time on these things with young athletes.

So, I’m not telling you to stop practicing your sport.  Not even close. There is no doubt that practice will pay off.

Just don’t forget to work on overall athleticism, especially at a young age when it’s much easier to develop.  It’s actually pretty easy to insert athletic development activities into sports practices, but coaches have to understand and appreciate the concepts of athletic development rather than focusing exclusively on sports skills.

The hard part for parents to understand is that you won’t necessarily see the benefits immediately.  Developing coordination and athleticism takes a long time and won’t help your kid make the last second shot this weekend.  Developing an athlete is a long-term proposition that requires patience and balance. Just make sure your child is working on things like speed, balance, and coordination just as much as sports skills at a young age so it’s easier for them to refine their skills later. 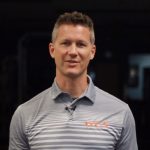 Jim Kielbaso is the President of the IYCA and Director of the Total Performance Training Center in Wixom, MI.  He has authored multiple books, articles and training products and has spoken at events around the world.  He holds a BS in Exercise Science, an MS in Kinesiology and has gone through multiple certifications through the IYCA, NSCA, NASM and more.  Jim is a former college strength & conditioning coach and has trained thousands of athletes at every level of competition.  He runs a successful NFL Combine training program in Michigan and has been hired as a consultant for major sports programs like the University of Michigan Football Program and the University of Kentucky Basketball Program.
Comment using:
IYCA
Facebook
Click here to cancel reply.