“I didn’t say it was easy, I said it was simple”

That proverb is one that sometimes needs some explaining. Easy means requiring little effort, while simple is more akin to not requiring a lot of steps. Simple does not mean easy, and easy does not always mean simple. Such is the nature of Olympic lifts.

Learning the Olympic lifts is much simpler than it is made out to be. Following a logical progression will eliminate much of the time it takes to learn these complex movements, but will not eliminate the struggle to become great at performing these movements.

The Olympic lifts are often said to be too time intensive to teach your athletes. Quite frankly, that statement is not true. Athletes in my facility learn to clean, snatch, or jerk in one to two sessions.  Following an introductory session or two, most individuals are ready to start using these lifts quickly and to great effect.

Here’s a few tips to get your athletes started on the platform.

Start with a hang power clean

The hang power clean can be started from a number of positions: at the hip, at the mid thigh, or above the knee. The aim with each of these is to reduce the actual distance the bar needs to travel, making the lift easier to complete, but also to avoid the floor start position which can be difficult for many people to use. Most problems with the lift occur from the floor to knee level in the 1st pull of weightlifting technique.

Below are a couple videos of the hip position start as well as a clean from around the knee area. Don’t focus on the differences between each movement, instead focus on the similarities:

One of the most overlooked areas of Olympic lifting is the dynamic strength that can be developed with the jerk. In certain programs (those of overhead athletes) the jerk may not be advised, but in the programs of nearly all athletes that you work with this movement can be one of the most powerful tools in your arsenal.

Choose the power jerk to get ready for the tempo and timing, and then progress your athletes to a split jerk to get single leg stability for an even bigger athletic benefit.

Move on to a combo

Combos are just multiple movements done 1 rep at a time until completion. For the clean this usually means combining different parts of the movement to replicate the whole. A typical combo for the clean might be a power clean of some sort, then a front squat, and finishing with a jerk.

Even if you are only interested in using the power clean in your training and not the full competition style clean adding the front squat is an important part of the lift. A good clean will see the individual catching the bar with their feet about shoulder width apart, but yet when we search the vast expanse of youtube you are certain to see 100’s of videos featuring people receiving the bar in the dreaded “starfish” position (that is, feet really wide). 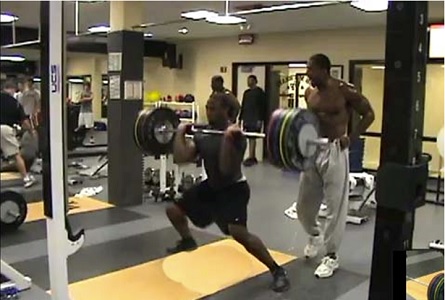 By requiring the next step to be a clean + front squat combo we are insuring a measure of quality. Making the athlete land in a position that allows them to front squat after receiving the bar will effectively eliminate any starfishing in your gym.

Here is a video of me completing a combo.

Move to the floor

Finally we are at a position to move to the floor (if you have not already). As we have said before, the floor to the knee is a particularly troublesome spot for many individuals.

Once the bar comes to the floor we must have a good strategy in place to leave the floor start with strong positioning. Get in a quad dominant position where much of the tension can be felt through your thighs, push from the ground and maintain your torso angle. Connecting the dots we get something like, “Push. Open. Push.”

Here is a video of me demonstrating this idea.

The Olympic lifts are simpler than many think, but definitely not easy. After some thorough teaching (as detailed in my DVD Complete Olympic Lifting) you can incorporate some of these strategies to get you on the path to Olympic lifting dominance.