When a new athlete comes into a collegiate program, one thing I have noticed is their lack of ability to properly execute correct jumping mechanics. When jumping incorrectly, an athlete is at a much higher risk of injury, but also is at risk of not achieving their full athletic potential. 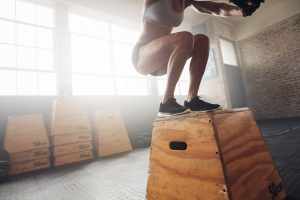 These are the flaws I noticed most often in jumping technique:

When helping an athlete learn how to properly execute a jump of any sort, there are simple steps to break down any jump to ensure they are executing each rep efficiently.

Regardless of how much you break down a jump, overall strength training and core training are required to build strength and kinesthetic awareness to each individual, so pairing these jumping progressions with a complete strength development program would be the most beneficial. Without a strong base of strength and body awareness, power will almost always leak somewhere.

Many of the ideas in this article have originated from watching the videos and ideas of Coach John Garrish at North Broward Preparatory School in Florida.

The first step to any jump is to eccentrically load the legs.  Many athletes tend to load into a valgus knee position during the rapid eccentric pre-stretch, so practicing this step on its own can be very beneficial. If you are still having problems with valgus, giving them a tactile cue, such as a band around the knees, can help them feel whether they are pressing out against the band and away from a valgus knee position.

+With hands on hips, have the athlete start in a normal athletic position.  On cue, have them rapidly bend at the knees and hips to create tension in the legs, loading them while maintaining proper alignment in the knees.

+If your athlete is struggling to even maintain correct loading in this position, stay here until they master it with proper technique.  Too often, we are in a rush to progress, but there is rarely a need to rush this process.

This short video demonstrates how to perform this part of the movement.

After your athlete properly executes the load position, the next step in the progression is to explode. A great way to make sure your athlete is properly executing each step of the vertical jump is to add a pause following each position.  This is not how an athlete will actually jump in competition, but it’s an excellent way to slow the process down so that athletes can concentrate on fundamentals.

+ Start the athlete with hands on hips and cue the load position explained above.  Have them pause for one second at the bottom to maintain a correct loading position.  On your “Explode” cue, have them rapidly straighten their legs to jump as high as they can without arm movement.

+ Another thing to look for is whether the athlete is extending with their legs or their upper body.  Many times, an athlete lacking strength will overcompensate by violently throwing the upper-body backward vs. extending through the legs and hips.  Watch the sequencing of the jump to see if they are using the upper body to a greater extent than the legs.

Once the athlete has properly completed steps 1-2 efficiently, we can add in an eccentric “stick” landing at the end. Continue to cue the athlete through each part of the jumping progression, then at the end of the EXPLODE the goal is to return to the initial LOAD position by sticking the landing.  Have them hold this position until your call.  You may have to demonstrate what this looks like so they understand how to stick the landing under control.  Explaining that it will look like a gymnast sticking a landing helps many athletes visualize what they should look like.

+Ensure the knees are driving out upon landing rather than in a valgus knee position. Correct knee positions in the final stick.

Once your athlete has efficiently completed steps 1-3, you can add in violent arm action on the load to explode. Have the athlete violently throw the arms long and back behind the pockets on LOAD, then violently reach them up in cadence with EXPLODE.

You can have your athlete start on your call, but allow them to move through the entire sequence on their own with proper mechanics.  Make sure you are still correcting any imperfections while they do it on their own.  Once the athlete has gone through the progression, he/she should start to self-correct so there’s no need to over-coach at this point.  Still, when you see an athlete making the same mistake over and over again, it’s important to give them feedback because they may not even know they are making the mistake.

Step 6: Try it with different jumps

+You can use these progressions for a wide variety of jumps including Broad Jumps, Lateral Jumps, single leg jumping variations and so on.

When eventually adding in boxes, make sure it’s a box that the athlete can safely jump to rather than struggling to land on top. The box should be just high enough that the athlete should be able to fully extend the hips and jump onto the box, landing safely in an athletic position on top of it.  There is no need for athletes to pull their feet up and land in a deep squat position on top of a box.  This will only get athletes thinking about pulling their feet up instead of executing the actual jump with good technique.

Once your athlete can successfully complete a jump, you can try adding in different variations such as medicine balls to perform a slam to vertical jump or a lateral slam to lateral jump.

This video shows several examples of the jumps discussed above, but you can get creative and more sport-specific as your athletes progress. 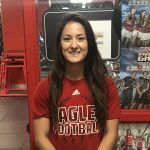 The IYCA Certified Speed & Agility Specialist course is the most comprehensive and scientifically sound speed & agility certification available.  With several hours of video instruction and a 249-page manual, you’ll be an expert in teaching and developing speed, agility, and explosiveness in athletes of all ages.  Learn more about the CSAS certification by clicking the image below.