Do you recall the days of your childhood when you would meet your friends outside in the morning and play all day long? You made up teams and played tag, baseball, and dodge ball, capture the flag whatever you felt like that day. It was unstructured and while there may have been rules you and your friends made them up to suit your particular situation. Many “experts” are lamenting the lack of free play in current society.

“Remarkably, over the last 50 years, opportunities for children to play freely have declined continuously and dramatically in the United States and other developed nations; and that decline continues, with serious negative consequences for children’s physical, mental, and social development,” Peter Gray, a research professor of psychology at Boston College.

Gray has presented research showing a correlation between the decline of free play in developed nations and the rise of depression, suicide, feelings of helplessness, and narcissism in children, teens, and young adults.

Gray also notes that the modern segregation of kids into same-age groups, common in today’s classrooms and schoolyards, may not be optimal for child development. He says that during age-mixed play, older, more skilled participants “provide scaffolds that raise the level of the younger participants’ play” and stretch their abilities to higher levels. He cites other studies in which older children were observed exposing younger children to more complex concepts of literacy, math, and sociability. By interacting with younger children, older students develop increased capacities to nurture, lead, and learn by teaching. [1] 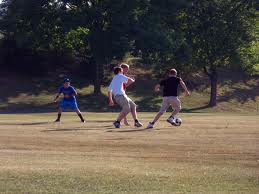 On Professor Gray’s last point I agree wholeheartedly! When I was a kid I always had to bring my brother along whenever I would play with my friends, he was 5 years younger than me. We didn’t take it easy on him and he learned how to compete and “survive” against more mature stronger kids. But he was better for the experience; he endeared himself to my friends because he always dusted himself off and got back in the ring. He also developed an enthusiastic group of supporters. It was fairly common to attract half dozen or more teenagers to his little league games. Not only did he earn respect and how to interact with older kids he also developed into quite an athlete. By the time he was in 7th grade I would always pick him first to be on my team and he would run circles around the stunned older kids.

In my 10-14 youth classes I occasionally make allowances for younger siblings (age 9) to make the scheduling easier for the parents. And inevitably the older sibling will “look out” for the younger by giving them a few coaching tips. It’s also very common that non-related older children will take the younger kids “under their wing” by providing a pat on the back or other subtle but powerful boosts to their confidence. This all occurs without any prodding from me I just watch it happen and make a mental note of it, and it’s a beautiful thing for a coach to see!

And therein lies the power of free play the kids take ownership and learn how to create their own culture. As coaches we need to provide a general outline for kids while still allowing and encouraging them to create and find their own unique way of doing things. What I mean by that is there is no one-way or even right way to throw a football, kick a soccer ball, or evade a defender. Kids if given the opportunity will find the way that works best for them and that type of instinctive and reflexive execution of skill is a key element of advanced athletic talent.

Think about the great athletes of all time do you think they honed those skills by playing nearly year round in adult organized leagues? I believe the skill and drive to excel was born at an early age on the playgrounds with friends and neighborhood kids. Once that passion and raw talent is in place then it can be harnessed by coaches and directed by parents. The current youth sport culture compels parents to get their kids involved in leagues and travel teams at a very early age. The idea, though flawed, is that if they don’t start their sport “clock” early their more advanced peers will leave them behind with no hope of catching up. That line of thinking is actually backward but that is a story for another day.

All kids are grieving the loss of free play! Back to my 10-14 class, I was wrapping up a session with the group and while we do all of the necessary speed, agility, core, mobility, and strength training (by the way you can still make this type of training fun) I still like to reward them with free play at the end of the class and they always look forward to it. One of the girls as she was leaving saw two brothers in the next class pulling all kinds of equipment to the middle of the floor. She curiously asked me what they were doing? I said they are building a fort for an active game that we play. She responded with an incredulous look on her face, as if to say, “hey, you’ve been holding out on us!” Yes, even the athletic kids like and crave unstructured creative play.

There is a time for more dedicated focus for young athletes in a single sport/endeavor but only when the time is right (late to-mid teens…), and even then there should be a plan in place to counteract those demands (off-field training and more free play). Until that time free play with as little structure as is necessary should dominate their physical culture.