The biggest mistake in training athletes to get faster. 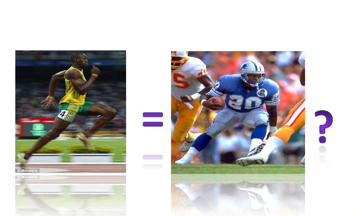 Both speed and agility are critically important for athletes to be successful on the field. Unfortunately I see plenty of programs or services offered by coaches that are skewed in the wrong direction, they promise to "decrease your 40 time" or "drop your home to first time".  While both of these things are important in the recruitment of athletes, they are not critically important to the performance of athletes.  Training speed and agility in some cases, verges on running some sprints and breaking out the agility ladder.

Common training for the development of speed and agility often include a great allotment of weekly practice on the wrong end of the speed and agility spectrum. While it is certainly desirable to have the ability to attain and maintain a high top-end sprint velocity, relatively few common athletic activities require significant amounts of time spent in this state. –With the notable exception of track and field sprinters.

For example, an analysis of soccer players revealed that participants most often sprinted for distances of less than 20 yards and of all the movements in a soccer match only 11% of them would qualify as high speed sprinting.  This of course goes for not only soccer but other sports as well; a study of basketball players showed that the maximum time spent sprinting was never more than 4 seconds.

As a result of studies like this peak linear speed is of secondary importance to sports.  Instead the ability to change direction quickly and accurately is critical. For example the same motion analysis of soccer players found that the same athletes that were not sprinting over 20 yards at a time, had to complete nearly 50 change of direction moves per match.
Many speed and agility programs utilized by high school athletes are heavily skewed toward peak linear speed with little time devoted to the improvement of agility skill. It is impractical to do so, when it is apparent that agility plays a much greater role in the outcome of game situations.

Some have argued that linear speed is a natural complement to lateral agility skill. In this line of thinking improving speed will somehow automatically concurrently improve agility. In fact in a study by Young Mcdowell and Scarlett they found that straight line sprint training had little ability to transfer to agility when game type conditions (movement upon response to a cue)  were applied!

Of greater importance to the athletes and as coaches is the safety of the athlete in the transfer of skill sets from linear sprinting to game speed conditions.  When focusing primarily on linear speed, most efforts are directed at improving acceleration or top end speed with little to no time committed to learning to properly decelerate.  However, deceleration precedes all change of direction moves and it therefore critically important for most every sport.

Deceleration movement is frequently implicated as a suspected mechanism of injury for many non-contact anterior cruciate ligament (ACL) injuries.11  Greater than 70% of all ACL injuries are non-contact in nature.12  It has been hypothesized that hamstring activation at the appropriate moment during the deceleration movement is essential to preventing anterior movement within the knee and exposing the ACL to injury.  Programs focused on deceleration training with proper hip height and knee position have been shown to reduce the risk of non-contact ACL injuries by 72%.13

Top end speed training and repetitive agility drills are not what athletes need to improve. Instead they need directed work on speed and agility as part of a complete strength, mobility, and conditioning program. Fortunately to learn more about every aspect of a complete program for high school athletes the IYCA has you covered with a really awesome product: The High School Strength and Conditoning Specialist

Wil Fleming is co-owner and Head Coach of Force Fitness & Performance, Fitness Revolution and Athletic Revolution in Bloomington, IN. Wil is also a member of the IYCA Board of Experts