Using fun games for athletes is a big part of the IYCA training philosophy, but many coaches simply don’t have enough games or fresh ideas in their repertoire to keep things interesting. 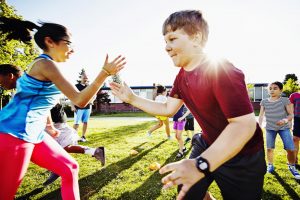 Ever watched a youth sports practice and heard the coach instruct so much that it sounded like an ongoing commentary?

Nowadays, over-coaching runs rampant and is killing the fun, creative, and competitive nature of our youth. As much as coaches think they have every ounce of control over their players and are making them better from the flood of cues, they aren’t.

And chances are, if you’ve run an agility session, set up a swarm of zig-zag cones, and barked at kids on how to cut faster, their response was deflated and their movements were inefficient. Or maybe you’ve run a conditioning session, set up full-field suicides, or made them jog the good-old-lap around the field. Did you seem them run with excitement and full speed? My guess is ‘no.’ 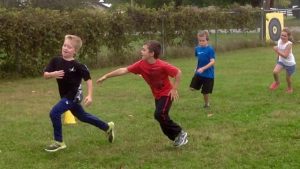 On the other hand, if you had a session with fun games for athletes, like a game of tag, set up no limitations, and gave minimal coaching cues, their response was amped-up and their agility was faster than you could say undulating periodization. Not only that, but they were elated in their response and had unlimited energy to run around.

Aiming to control every move, turn, and action of our youth athletes becomes counter-productive to building their creativity, improving their problem solving, and developing their basic motor skills in an exploratory fashion.

To that end, kids are so malleable – from their bodies to their brains – they crave novelty and the idea of simply “figuring it out.”

Allowing kids to play and enjoy a game at practice fills their souls with exuberance and life, while helping them improve balance, coordination, stability, agility, strength, conditioning and so much more.

What kills me about self-proclaimed youth speed trainers, is they are getting technical just to get technical.

They have kids line up in a sprinter’s start, or perform A skips, or tap their feet through a ladder, or perform a monotony of wall acceleration drills. For the full hour session!

To avoid the mundane nature of drill sergeant sessions, I have an idea: to get kids faster, how about having them race?

Because no amount of barking “pump your arms!” or “drive your knees!” will suffice. What’s beautiful is, when you have them face an opponent, you bet their form cleans up and they’re going as hard as they can.

Race. I urge you.

I’d go as far as to say to vary the starts, or the stimuli that initiates the drill, whether this is auditory or visual or even touch.

Another nice tip is to give the leader a start from a disadvantage so they have to hustle to not get chased down, and the “chaser” has to work extra hard to catch them. This also eliminates boredom, and adds some spontaneity.

And as far as efficient agility, here is an amazingly fun game for athletes that improves shin angles, center of gravity, and maximal effort:

2. Mirror Drills
Competing to keep up with a teammate in the form of a mirror drill is one of the best ways to elicit maximum effort, while  tapping into the visual senses.  Here are a few examples of some of my favorite mirror drills:

When was the last time you had your soccer team play handball? Or your basketball team try dodgeball? Or your wrestling team play Capture the Flag? Or your softball team arm wrestle? It bodes well to venture away from the primary sport to explore athleticism further, and expose kids to a diverse menu of movement.

One of my favorites is 1v1 dodgeball. Though not my athletes’ primary sport of soccer, there is a myriad of skills carryover going on here: reactive ability, spatial awareness, upper body power, stability, and agility.

There’s also something magical about being put in an uncomfortable situation and being forced to adapt.  When using fun games for athletes, they don’t always need to be “sport specific” because you’re developing all-around athleticism and giving them a chance to utilize the skills you’ve trained in a way that’s different than normal.

This much I know: you can’t go wrong with getting strong.  Having competitions with the various strength and power movements, such as Pull Ups, Planks,  Jumps, Tosses, is a great way to create culture and get kids excited about training.

Here are a few competitions to try:

Broad Jump Competition for Lower Body Power – The only rule for this one is that players must stick their landing in order for their best measurement to count. What I’ve found is, instead of having them perform reps of jumps on their own, this competition actually improved their form.

Chaos Bear Hugs Competition for Core Stability and Wide Base of Support:

And this is just the beginning.

The best part about being a youth coach is that you have the freedom to be as creative as you like, to have fun with your drills, and to experiment with what makes kids compete, while smiling and laughing at the same time. You will find that you are just as pumped-up as the kids when executing fun drills in your sessions.

I hope these fun games for athletes help you to serve your players better, and inspire you to build off of the basic movement skills while you add your own sprinkle of fun and play.

Erica Suter is a soccer performance coach at JDyer Strength and Conditioning in Baltimore, Maryland. She works with youth athletes across the state of Maryland in the areas of strength, conditioning, agility, and technical soccer training. Besides coaching, she is a passionate writer, and writes on youth fitness as well as soccer performance training on her blog www.ericasuter.com. She also is the creator of the Total Youth Soccer Fitness Program, which is a comprehensive guide for coaches and parents on how to train youth soccer players both safely and effectively. Her mission is to inspire a love for movement and play in kids, and motivate them to stay active for a lifetime.