Learning about force vectors in speed development can change the way you instruct, cue and provide feedback to athletes training for speed.  I am a firm believer that a coach who is good at teaching speed and agility is good at understanding vectors of force and how they need to be used in order to gain efficiency in expressing movement language.

You can break down each phase of sprinting (acceleration, transition, and max velocity) and see that each phase requires a slightly different force vector to in order to allow for an efficient movement language. (see figure 1). 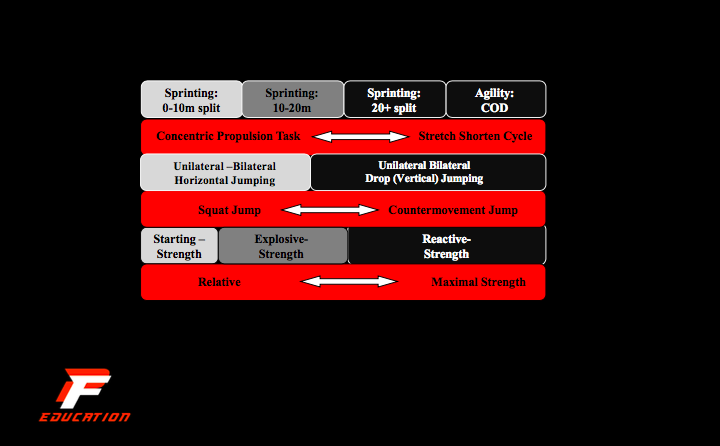 As we can see from figure 1 the first 10 to 20 meters we require the body to move and displace more horizontal power. As we begin to transition into more top end speed or max velocity we will notice that vertical forces play more of a key role than do horizontal. Now do not be mistaken as we still want the athlete to move as fast as possible horizontally its just the body position become more vertical which lends foot strike to happen underneath the hips as opposed to behind the hips. This change in force vectors is what lends top end speed mechanics to having more vertical hip displacement than we will see in acceleration.

It is critical to understand where these force vectors needs to be applied in order to see small mechanical breakdowns that occur when watching an athlete sprint. For instance if an athlete is striking the ground in a top end phase in front of the hip rather than just under it can make a world of difference. Each foot strike in front of the hip in this phase is what we call a horizontal breaking force and is why Usain Bolt wins most of his races. Each time an athlete strikes in front of the hip they are actually slowing themselves down. Watch this video and you will notice that Bolt loses the acceleration phase only to win the race as his foot strike allows him to keep his velocity while everyone else is slightly breaking.

As you can see if you watch the foot strikes you’ll notice what I am talking about as they relate to the hips the vectors it creates and it’s impact on speed. To finish up, I shot this short video as well to try and help you better understand vectors and their influence on speed in relation to the hips.

Coach Hollabaugh’s coaching experience has taken him from the University of South Florida to sports performance facilities in Cincinnati, and Indianapolis before creating the ProForce program. Kevin started the ProForce program from zero clients in October 2014 and now has reached over 400 athletes and has become the training destination for baseball players in the Greater Cincinnati area.

Kevin also serves as an adjunct professor for the University of Cincinnati where he teaches Methods in Applied Strength and Conditioning for the Athletic Training department, and works for the Pre-Sports Administration Program.

Force Vectors are an important part of speed training, and they are a large part of the IYCA Certified Speed & Agility Specialist course.  Click on the image below to learn more.