Be A Better Coach:
7 Improvements For Coaching Strength Exercises For Athletes 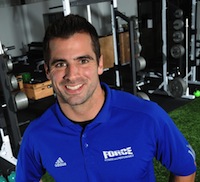 In the history of man, and of training there have been more than a few training programs that have been passed off as the best thing since sliced bread, and a lot of them have been exposed as bunch of junk as we (coaches and fitness pros) have gotten smarter.

Training programs are starting to include better and better movements. The general public and athletes alike are shying away from the use of machines and moving towards training on their feet, with free weights, and tons of other awesome tools. Unfortunately some great strength exercises for athletes are often being done poorly.

Lets fix those busted programs. The next 7 strength exercises for athletes are awesome to do, but not when they are done poorly. 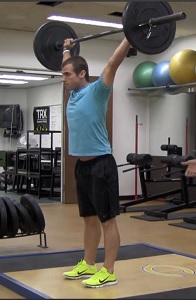 Lets just get this straight first. There is no inherent problem with the movement itself. Hang snatches rock. The biggest problems I see with athletes doing the hang snatch is in the initiation and completion of the lift.

Athletes that need to fix the initiation of their hang snatch slide their knees forward immediately when starting the lift above their knees. This forward weight shift will lead to an incomplete extension of the hips and typically mean a missed lift at higher weights or a forward jump to receive the bar at lower weights.

At the moment of the catch the athlete needs to work on a timely and powerful punch overhead. Catching the bar with poor timing, arms unlocked with a press out following, is going to lead to a ton of missed lifts.

As a movement in and of itself the box jump is pretty awesome. It gives athletes a target by which they can measure progress and reduces the impact of landing from a jump. That being said there are TWO big problems that need to be fixed when athletes are doing box jumps.

Problem 1: Jumping down from the top of the box. When we get down to it one of our benefits of using a box jump is the reduction of the impact of landing from a maximal effort jump. Why then, may I ask you, does it make any sense to jump down from the box? The answer is it doesn’t. Make your athletes create a path down from the box and step down.

Problem 2: Jumping on a box that is too high. Our goal while training athletes should be to provide them with opportunities to safely improve techniques that are applicable in the field of play. Jumping on boxes that require the athlete to pull their knees to their chest does not accomplish this task. Instead it creates an unsafe movement patterns, and will eventually ruin the athlete’s chances of becoming a shin model in the future.

For the most part I think that many programs are seriously lacking in work in the transverse plane, there is so much work done in the sagittal plane that athletes are hampered in their ability to move rotationally. There is much to be said about mastering the sagital plane first but for athletes that compete in rotational sports, learning the right way to deliver power rotationally is very important

The problem that I see all too often is rotational power being produced through movement in the lumbar spine. Regardless of what your opinion is about how much movement should come in the lumbar region, it definitely isn’t a region that is made for producing power. Rotational medicine ball throws need to occur through movement that originates in the lower body, and is expressed through the upper body, a stable lumbar region is key to making sure that the most power is transferred. Pay attention to the back foot on rotational movements to ensure that the movement is starting with the lower body. 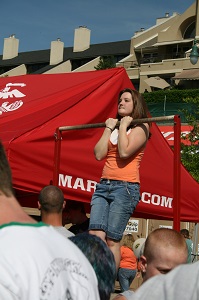 Lets all get together and say what we are thinking right now. Chin ups should never again be denoted as “chest to bar chin ups” because really, what’s the point in pulling only your chin past the bar? Chest to bar needs to be the standard from now on.

Doing chin ups, and pull ups for that matter, that go only to chin above the bar miss out on much of the great functional portion of the movement. When doing the partial movement there is little low trap involvement. Going a little functional anatomy on you, low traps are largely responsible for scapular depression, going only to the chin above the bar is primarily a movement dominated by the lats.

The trap bar deadlift is a great movement, but it doesn’t readily fit into the categories of movement that we like to use to create our training programs. Is it a squat pattern or is it a hinge pattern?

My personal preference is to make it a hinging pattern. Quite simply most athletes get plenty of squatting patterns in their training without our assistance. Making the trap bar a hinge pattern can alleviate this issue.

Teach athletes to do the trap bar deadlift just as you would teach them to go to the ground in the power clean. Hinge first (RDL) then squat until their hands are on the handles. Drive through the heels, keeping the knees back on initiation and then finish with hip extension.

To me it all really depends on how you do them. As I have done coached this movement more and more I have realized that the tendency of most athletes while training is to let the knee slide forward very quickly after the getting them set up in the start position.

Cueing athletes out of this movement can correct the problem for many athletes, but we have adopted a solution that can fix this problem for EVERY athlete.

The concept of blocking a movement to prevent the incorrect pattern can be adopted for most any movement, while I was a thrower we would do this to prevent unwanted technical problems in the shot put and hammer throw by placing a physical barrier between myself and the bad pattern.

With the split squat we use a bench or a band stretched across a rack to prevent the knee from moving forward. In the bottom, 90-90 position the athlete’s front knee should be in contact with the bench. Push up and down from that position.

The start on the power clean is one of the most commonly butchered movements in the weightroom. Among many pre-lift rituals that can put athletes in terrible positions, the lift-off from the floor is often misunderstood.

While the bar is on the floor it is a distinct unit from the body, meaning that both the body and the bar have their own center of gravity. The bar’s center of gravity is always in front of the lifter’s while the bar is on the floor. The goal when lifting the bar off the ground is to link those two centers of gravity. This means that upon lift-off the bar must move back and up toward the athlete and not vertically (and definitely not forward).

Many athletes don’t get this right and always pull the bar in front of the body, and are unable to reach full hip extension in the final portion of the lift.

Fix these problems and your program might not be perfect but you are on your way to getting the most out of some awesome movements.

If you are interested in how to program these strength exercises for athletes into your programs I highly recommend that you pick up a copy of Complete Athletic Development. This best-selling IYCA product will breakdown everything you need to know about training athletes and preparing to be their best.