When my mother attended her first ever Parent-Teacher Conference, she expected Mrs. Candlette to tell her how smart I was. Or how polite I was. Or to hear about some other facet of my considerable six year old intellect…

Instead, the first teacher to parent description to fall upon her ears was,

“Wow, Latif sure can run fast!”

What can I say? I owned Duck, Duck, Goose!

So, when I arrived at the University of Connecticut, track and field scholarship in hand, I thought I was well on my way to the Olympic Games.

You can imagine my horror when, a few weeks before the start of my first Indoor Track Season, my coach pulled me into his office. He told me, not so subtly, that I was being red shirted. He then told me, not so subtly, that he thought I was a fluke. That he had no idea, based on what he saw from me that fall, how I possibly ran 10.8 for 100m, 22.1 for 200m or 48.8 for 400m as a 16 year old. (That was pretty good for New England back in the mid ’90s.) He then reminded me that scholarships are year to year and that I was not on pace to have mine renewed!

I slowly shuffled back to my dorm in a state of panic and disbelief.

How did it get to this point? I work my butt off. And I set all types of records when I was a high school athletes.

Sure, I had lost the bulk of my senior year to a torn hamstring. But, how was I supposed to know to do a ‘dynamic warm up’ before a race? I didn’t know what that was. My hamstring was tight that day, so I static stretched it even harder.

Isn’t that what you’re supposed to do?

I thought I had gotten it loose before the start of the relay. And I was still furious I had lost a race earlier in the day. So I was going to take it all out on the anchor leg of that 4×200. As I came around the first turn, I shifted into the gear that normally elicits ‘Oohs’ and ‘Aahs’ from the crowd.

And I got them. But not the good kind.

Because the next thing I knew, I felt a stabbing pain in the back of my leg. And then I was flopping around on the track like a fish out of water.

It wouldn’t be the last time.

After college, I was hired as an assistant high school track coach by my mentor Kevin Murphy. He told me, no so subtly, that being able to run fast in no way made me qualified to teach people to run fast.

This was, in fact, news to me. Like most athletes, I believed my athletic prowess was a direct reflection of my innate coaching ability and knowledge. All I had to do was teach kids what I already knew.

He proceeded to hand me a box full of VHS tapes, articles, manuals and all of his workouts and progressions from the previous ten years or so. He told me if I wanted to be a good coach, I should study these materials and ask questions.

I dove in. Very quickly, I realized two things:

My first coaching epiphany came while studying the fundamental importance of designing all training around development of the five biomotor abilities:

…in addition to consistent and specific mobility, endurance and coordination development.

But, when I got to college, I didn’t have a base of any of those things except, maybe, endurance.

I grew up doing martial arts and playing basketball and football. I didn’t join the high school track team until the spring of my sophomore year. I was no specialist.

During those developmental years, I did lots of stretching in karate class. Lots of suicides during basketball practice. Lots of gassers at the end of football practice. And lots of distance runs and repeat 200s at track practice.

But, I never ran at full speed, ever, before college.

I was never taught how to accelerate, decelerate or change directions, ever, before college.

I never did a dynamic warm up, ever, before college.

I was never taught how to lift weights or given a bodyweight circuit, ever, before college.

I never learned a drill or was told I had to perform anything in particular, in any specific way, ever, before college.

I had no ‘base’ to speak of, sport specific or otherwise. I just floated through high school on raw talent and a mind numbing contempt for losing.

As a track and field coach, athletic development is what we do. It is our sport. In fact, outside of the United States, track and field is called Athletics!
High School Athletes

So it is natural for me to focus on developing a base of speed and power – the qualities required to succeed in the events I coach.

And this is where many youth coaches of ‘team sports’ drop the ball. Well meaning as they may be, they don’t develop a base. They don’t spend enough time on athletic development or multilateral training (despite both common sense and countless scientific studies showing this approach leads to healthier athletes performing at higher levels much later into life.)

Instead, most young athletes spend the bulk of their training time scrimmaging in their sport or practicing ‘sport specific’ movements, patterns and plays. Youth coaches, apparently, don’t have the time or inclination to learn biomotor development, so they try to make up for it with even more scheming and scrimmaging.

So we have an epidemic of overuse and acute injuries to young athletes, especially developing females.

It’s not because the basketball coach doesn’t know how to teach hedging a pick. It’s because the athletes repeat the same high stress movements over and over again without developing the biomotor skills that allow them to handle and recover from the stresses placed on their bodies.

It’s because the basketball coach and the soccer coach bamboozle young kids (and their fathers…) into believing that specializing in one sport, starting at age 7, will put that athlete in the best position to get that coveted Division I scholarship.

But here’s the truth:

Little Johnny the 15 year old doesn’t need to build a ‘basketball specific base’.

Or a ‘soccer specific base’.

Or a ‘(insert sport) specific base’.

For subcollegiate athletes, there is no such thing as a ‘sport specific base’. Anyone who says otherwise is, almost certainly, trying to sell a sport specific training package or spot on a club team. While I respect their hustle, it’s still misleading.

My track athletes regularly overachieve during their track season/s. And they go on to excel in their ‘team’ sports when it isn’t track season.

Why does competing in track and field make Johnny a better basketball player and Mary a better soccer player even though we don’t pay much attention to things like ‘deceleration’ and ‘agility’?

Because I don’t look at Mary as a ‘soccer player’. She can call herself that when she gets to college. I treat Mary as one of my 15 year old high school athletes who happens to play soccer or happens to be running track.

I develop a base of biomotor abilities through a broad, multilateral approach that gets gradually more specific as they get older and more skilled.

I don’t try to make Johnny a better basketball player. Or Mary a better soccer player.

Building a biomotor base makes training more fun because athletes do so many more non-repetitive activities. And it reduces the likelihood of acute injuries, regardless of their skill level.

I know from experience you can only get so far on talent alone. And torn hamstrings really, really hurt. Especially when they don’t have to happen.

And as coaches, it is our responsibility to build a broad base of knowledge ensuring that they don’t. 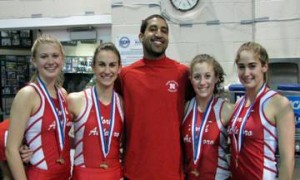