First it was the Dream Team!

Then it was the Big 3 with Lebron, Wade, and Bosh.

Now it’s the Warriors or pretty much anywhere Lebron is playing.

It seems to be most prevalent in the NBA but certainly it happens across all pro sports to a certain extent. For TV ratings and viewership this is probably just going to become the new normal within professional sports. It’s starting to happen more and more at the collegiate level with recruits teaming up and all heading to one school to play ball. I even see this to some extent in high school with players transferring schools just to play on a different team.

While it certainly can make for some exciting teams. I think we need to be cautious of how much we let this mindset start trickling down into high school and especially youth athletics.

Before I give my argument against the Dream Teams, I want to first give a reason why they can be beneficial for an athlete.

Competition creates improvement. Without competition complacency starts to set in. If you are constantly competing against (or practicing against) someone just as good as you, if not better than you, it will force you to up your game.

I’ve experienced this first-hand running track in college. My event was the 400m. We had five really good 400m runners on that team, but only four were going to make the relay team. It pushed all five of us to be better and continually push ourselves in practice. Practice, as we all know, is where the improvements are made, so if practices are not competitive, nobody gets better.

Going to a “Dream Team” where you would get to practice and compete with the best of the best only makes sense then….right?

Possibly… If that is your mindset going into the move.

However, if that competitive mindset isn’t already established. The athlete may just be taking the easy route to wining a championship and perhaps college exposure and earning athletic scholarships.

A big part about youth and high school athletics is developing a competitive mindset.

Some would call it grit or resiliency.

Giving athletes the easy route to championships at an early age may do more harm than good both in that athlete’s career, and their approach to life.

And, for most kids, that is what athletics should be about – learning about life and how to deal with adversity through lessons learned in sports.

Coaches and parents need to encourage a developmental process for kids. They are certainly not going to have that outlook initially, especially in the day and age of social media showing highlight reels but never highlighting the process.

Kids (and parents) have a love affair with D1 athletic scholarships. In my opinion, the whole D1 scholarship is over-glorified. If you or your kid has the opportunity for a D1 scholarship, that is an awesome accomplishment, and you should take pride in that! However, it shouldn’t be the reason you pick a school, and it’s not the end of the world if you don’t receive any D1 offers.

I grew up in a small town (graduated with just over 100 kids in my class). Needless to say, my high school isn’t the first stop on a big D1 school’s recruiting trail.

I played football, basketball, and track in high school and received interest from a number of DII and DIII school to play different sports. It was my dream as a kid though to go D1. I eventually did get a couple letters from D1 programs saying I could be a preferred walk-on in Track, and if I scored points in the conference meet, that I could work myself into a scholarship.

With aspirations to go D1, I jumped at the opportunity!

A couple lessons here: 1) If you are good enough, schools will find you….usually.  With social media, YouTube, and highlight tapes being passed around, it’s very easy for a school to catch wind of you. 2) I was extremely naive in high school, assuming that colleges would find me.  It may sound contrary to point #1, but you have to be pro-active about the process.

I sent out zero highlight films to schools and went to zero showcases for any sports. Schools still found me, but I would have received many more offers if I’d done a little more work to be seen. If you are serious about wanting to play at the next level and earning athletic scholarships, you need to make it a point to be seen. Go to showcases, send film to schools you’d like to go to even if you don’t think they’d watch. I’ve heard of several athletes getting athletic scholarships by doing this. It shows the coach you care, and if they offer you a scholarship it’s usually because a specific intangible they see in you or you fit well with the system or coaching scheme they run.

But again, don’t forget about YOUR ability to develop as an athlete and a person. This is what I did not understand when choosing a university.

I ended up going to that D1 program as a preferred walk on, only to be cut from the team at the end of the very first semester on campus. People from relatively small towns are not exposed to how many great athletes are actually out there. Up until that point, I was always the best on the team and had never been cut before. I thought athletic scholarships were pretty easy to get.

Getting cut sucked! But looking back, it was the best thing that could have ever happened to me.

I ended up transferring to a DII school and ran track at the University of Findlay. Like I mentioned before, we had five really good 400m runners on that team and many other very talented athletes. This taste of adversity forced me to work harder to get better. When all was said and done, I ended up running faster times than anyone from the D1 school I was originally cut from. I also had the opportunity to compete nationally at the DII level earning All-American honors. I received an athletic scholarship in undergrad, and, after my athletic career was over, I worked as a graduate assistant for the athletic department as I finished my doctorate degree. 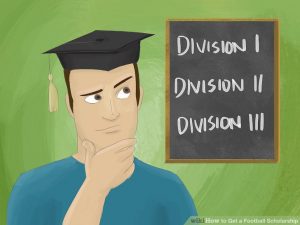 I say none of this to brag, but to only bring your awareness to the possibilities elsewhere!  It’s all about finding the right fit.  I feel very fortunate that I found the right fit.

Most athletes who play a sport in college are going to be doing it for the love of the game, the competitiveness inside of them, and the perks that come along with being an athlete at a University. Some will have the ability to take it to the professional level. Like I said before, if you are good enough, someone will find you no matter if you are DI/DII/DIII or junior college.

Select an environment that allows you to develop as an athlete but also a person. Go to a school where you can both compete and play (in practice and games). Choose the opportunity to play, and as a result, you will get better!

The ability to go somewhere to play a sport you love, and possibly receive athletic scholarships for it, is a privilege (no matter the level) that not many people get. I see way too many athletes waste the opportunity by not taking advantage of it with their academics. I didn’t know it at the time, but being cut and transferring also saved me 10-20 years of paying down student debt.

Sports can bring you countless opportunities if you choose to look at it that way. It’s important to recognize that it’s an opportunity to grow as an athlete and person, so don’t put up blinders and have tunnel vision to what may seem glamorous at the time. 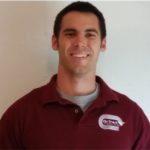 Dr. Greg Schaible is a physical therapist and strength coach specializing in athletic performance and a regular contributor the the IYCA. Greg is the owner of On Track Physiotherapy and owner of the popular online education resource Sports Rehab Expert. Greg works with athletes and active individuals of all ages. As a former athlete himself, he attended The University of Findlay and competed in both Indoor and Outdoor Track & Field where he earned honors as a 5x Division II All-American and a 6x Division II Academic All-American.