Perhaps the most common question I get from coaches and parents is “how do I get my son or daughter faster/quicker/jump higher?” They are often surprised by my response, as well as what I am about to discuss in today’s article. My answer is typically “get them stronger” and that is usually met with a look of confusion, so I elaborate.  In the past, I’ve written about the values of squatting through a larger range of motion than simply to 90 degrees, I explained in greater detail how strength is undeniably effective at developing speed, quickness and vertical jump height in athletes, especially young ones. What I did not discuss was the next part of my answer to that question.

I typically answer that my primary concern is typically more about developing the athlete’s ability to accelerate and decelerate and that this is largely accomplished with strength work in addition to drills that focus specifically on these skills, rather than top end speed. The reason for this is quite simple. Nearly every sport requires quick bursts of speed over 1 to 15 yards or the ability to stop on a dime and then change direction and accelerate again.  In other words, the world’s greatest 400-meter sprinter will be quite average at soccer, football, baseball, basketball, volleyball, lacrosse, or any other running sport if he or she cannot stop quickly, change direction, and quickly accelerate. If you are having a difficult time envisioning this, simply think of the great running backs in the NFL or point guards in the NBA. Many of them do not run a 4.4 40 yard dash (VERY few do). However, most can hit top speed in a few steps, stop, cut, and hit top speed again very quickly and efficiently. 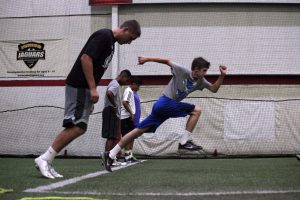 So how do you develop these things?  By training acceleration and deceleration mechanics, and strengthening the movements and positions that maximize the athlete’s ability to perform these skills.

Strength is a big part of this for a couple of reasons. First, acceleration and top-end speed are both a result of how much force can be produced through the foot at foot strike and how efficiently the body can utilize that force. There are many factors that play into this, but strength, posture, and body position are the most critical. What I want to focus on in this article are the acceleration drills we like to work on in order to maximize the force that is created and ideally learn how to create more and/or waste less. Assuming two athletes are the same size and exhibit similar strength and muscle fiber composition (ratio of fast to slow twitch), there are a few mechanical and structural factors that will impact the ability to accelerate and/or decelerate. Those we tend to focus on are body position/posture, knee drive, foot position, and arm swing.

When elite level sprinters run to 100-meter dash they are typically not upright until at least 35+ meters into the race. The reason is simple: in order to accelerate, the body has to be in a position that allows the athlete to apply force into the ground in both vertical (downward) and horizontal (backward) directions. This is a simple concept because most athletes will quickly understand that if you push straight down you will go straight up.

One of the first things all athletes must be taught is the correct body position required for ideal acceleration. To do this there are several drills and training aides that can be used and the most simple and readily available is a wall. By simply leaning forward at somewhere between 45 and 60 degrees, and keeping the body tight (as if doing a plank) from head to heel the athlete is now in a great position. From this position we have the athlete work on basic leg drive with the knee up and heel under the glute of the raised leg, all with a dorsiflexed foot. We want maximum knee and foot lift and tell the athlete to envision a rod coming out of the opposite knee. We want the foot to be above this rod while maintaining posture.

From here we do individual ground strikes and then progress to alternating strikes and eventually to multiples of 3, 5, 7, 9 etc…, or for times of 5-15 seconds. Remember we are not training for conditioning we are training to develop the ability to produce violent, powerful ground strikes while maintaining ideal postural integrity and a dorsiflexed foot, since the more force we put into the ground the more we will get back. So far so good, right?

Hopefully, but I am regularly reminded just how hard it is for most young athletes to maintain this position for more than a few seconds without beginning to move their feet forward (thus changing the angle we established), sticking their butt back (breaking at the hips which leads to tremendous energy leaks), or tilting the head forward and looking down, which also tends to lead to several postural issues. Since this position is critical, it is important to both stress the correct form and ALWAYS correct these flaws and also identify if the issues taking place are due to either a lack of postural control (strength/stability) or a lack of mental focus. In most youth athletes, the cause can be rooted in both. As such, postural strength issues must be addressed since a lack of correct body positioning and alignment will compromise full acceleration potential. Also, the inability to focus long enough to complete this mundane yet vital task may make speed the least of their concerns, but this is another topic altogether……
To develop the athlete’s ability to maintain perfect posture over extended periods of time we must focus on this area in all phases of training.  We can develop the musculature required to hold many of these positions by performing simple glute bridges and planks (done properly with the core gently braced at all times). I have found too often that athletes plank incorrectly and just hold their bodies up. In order to improve activation, the coach may palpate the athlete’s entire core (low back, obliques, glutes, hip flexors etc…) to be sure all muscle groups are activated.

In addition to these, I have found that focusing on postural integrity during everything from warm-up to cool down also makes a huge difference. As a result, anytime the athlete is standing is a good time to drive home the importance of standing tall with the shoulders back, core braced, head in a neutral position, and other aspects of good posture expressed. 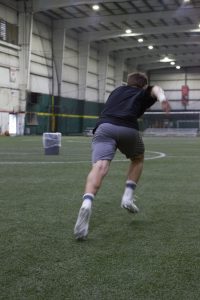 Once the acceleration position has been refined and the athlete understands the basic reasoning and concepts that necessitate it, we move to starts. The tricky thing about having the body in the required position is that the only way to get it there is by leaning into or against something such as a sled or thick resistance band or by starting from positions that put you into a forward lean. The most common way we do this is with a traditional 3-point “40 yard dash” start, a falling start, or a single leg falling start. The point of emphasis must always be to explode out and to stay low. In the 3-point stance start, the trailing leg does very little other than cycle through (and ideally does so quickly in order to be in optimal position to take the next step). However, the lead leg is the one that must explosively push the athlete out because it is ultimately a series of strong, powerful, efficient “pushes” that lead to impressive acceleration. In his latest book Coach Mike Boyle describes a start drill he coaches that uses a large crash mat for his athletes to literally jump out and land on to teach the aggressive drive required to fully grasp this concept1. The athlete simply gets into a starting position and explodes out of the position so aggressively that he or she will essentially dive onto the ground. This is where the mat comes in handy!

If you can get your athletes to correctly perform these drills while maintaining postural integrity and slowly develop the habits of correct arm drive and foot position, dramatic improvement in 10 or 20 yard dash times will result. These times are what separate the 4.6 athlete from the 5.0 athlete, but more importantly will have far greater carry over than performing “top-end speed drills” such as those taught by many speed camps and used by track athletes such as B-skips, etc. Over the years, I have found that developing proper arm swing and dorsiflexing the foot takes a tremendous amount of repetition in those who do not naturally do these well. For this reason I recommend incorporating some very short drills to work on these during warm ups as a way to get almost daily exposure to them in a college or in-season competitive club sports athletes.

Every quality that coaches and parents desire for their athletes is rooted in strength—either the ability to produce force or the ability to maintain postural integrity. So when a parent or coaches preaches first-step quickness, speed, and agility remind them that each of these is largely dependent on getting stronger AND learning how to transfer that new found “horsepower” into more explosive, deliberate, and efficient movements. How fast an athlete steps has little to do with the step and almost everything to do with the drive leg’s ability to produce force and do so quickly. That is what results in a fast and explosive start.

The same principles hold true for developing the ability to pull away from a defender or close the gap on a player ahead of you. So whether you are a coach or parent, the next time you are looking for “speed development,” remember that it is actually strength and movement development that you desire because perfect running form without these traits is like a beautiful race car with a golf cart engine. It may look sleek and fast, but will take three days to reach full speed!

The mechanics discussed in this article, as well as dozens of additional drills and coaching cues, are covered in great detail in our Certified Speed & Agility Specialist materials.  The CSAS has been recognized as the most thorough speed certification in the industry.  Learn more about the CSAS by clicking the image below.