With fall officially here, it is now time for Baseball Showcases and Fall Leagues. During this time, high school athletes have the opportunity to go out and show off their talents to college scouts from the area. These events will afford them the opportunity to show off their speed, strength, athleticism, and baseball IQ. Many of these showcases will take athletes through a battery of tests. Similarly to the 40 in the NFL combine, the 60 yard sprint is one of the coveted tests of a baseball showcase.

Due to the popularity of this test many of the baseball athletes that I come in contact with are looking to improve their 60 yard sprint time. When I begin working with these athletes I will break down their acceleration and transition phases and spend time working through each of these prior to talking about the second half of the sprint.

However, I and others have written before about the set up, acceleration phase, and common pit falls throughout the first portion of any sprint. Instead, today I want to discuss three reasons why many of these athletes struggle through the last 30 yards of the test. In my eyes these three ideas create the largest issues during the second half of the 60 yard sprint:

As a result of this poor transition into the upright posture you will see improper balance and tilt in the hips. Excessive anterior tilt (forward tilt) will limit the knee drive during the swing and re-positioning phase of the gait as well as introduce lumbar flexion. With limited knee drive the amount of vertical force produced with each stride will be limited.

Additionally, I will see, what I term, “reaching” within the hips when the athletes are not in full, upright position. This occurs when the athlete rotates the hips toward the foot that is taking the next step. At no point in running should there be rotation. We, especially, do not want to see rotation within the hips as this will cause excessive breaking force through the hip as well as added stress in the low back due to repetitive rotation during running.

Sometimes this break down in form can stem from a strength issue as opposed to a movement issue. This leads me to my next topic…

Lack of Supportive Strength
Another large obstacle that many athletes face when looking to improve their 60 time is the lack of strength that supports high velocity linear sprinting. Baseball athletes are agility-based by nature and very rarely sprint in a straight line for longer than 90 feet. This means that running a 60 yard sprint at top speed can be a 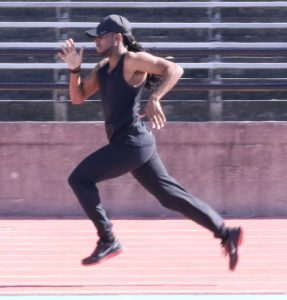 little out of their wheel-house. This in combination with the sport demands in baseball, athletes can show muscular or movement “weakness” in areas that are crucial to max velocity sprinting.

These muscular weaknesses manifest themselves in improper movement patterns such as lack of extension at the hip, knee, or ankle, internal or external rotation at the hip following toe off, or rotation in the hips as the approach foot contacts the ground. Each of these issues can be addressed and resolved with proper strength and technical training.

Lack of Speed Endurance
Finally, many of these athletes lack the speed endurance to complete the sprint, especially for multiple reps. When I refer to Speed Endurance I am addressing the athlete’s ability to reach maximum velocity and maintain it for a set period of time prior to deceleration occurring. Then being able to recreate that velocity multiple times over. Some of the most talented sprinters in the world find the success that they do because they are able to sprint for 50-70 meters prior to experiencing deceleration. The same will hold true for baseball athletes preparing for a 60 yard sprint. The athlete who is able to achieve maximum velocity first and hold their position and speed the longest is going to come out on top.

When we discuss improving your speed endurance the last thing we want to think about is running miles. Honestly, when I am working speed endurance with my athletes we will very rarely run longer than 30 meters. Why? Well, for the very reason that we are doing the drill. I want my athletes to practice sprinting at maximum velocity. If I already know that they cannot hold their max velocity for longer than 30 meters then why would I allow them to run further than that? At that point we are practicing running slower. To take it a step further, why would I allow these guys to run miles at this reduced speed? Again, we are now practicing running slow which is the opposite of what we want.

Instead in this instance I will work with athletes at distances of 20-40 yards and through 4-10 repetitions as they can handle it. I will also incorporate specific tasks to work on throughout the sprint. For example we might do 5 reps holding a PVC pipe over head to facility proper posture and front side mechanics before removing the pipe and running normally to create carry over from the drill.

About the Author:  Nick Brattain is the owner of Brattain Sports Performance in New Orleans, LA.  Throughout his career as a track athlete at the University of Indianapolis, he accumulated 3 NCAA All-American titles, 6 GLVC Indoor/Outdoor Titles, and numerous indoor and outdoor records. From 2011 to 2014, Nick worked for a private, hospital-based facility in Indianapolis, where he grew exponentially as a coach due to the high caliber of colleagues around him and the opportunities he received to work with some of Indy’s most elite athletes. In 2014, Nick moved to New Orleans where he began Brattain Sports Performance. He is currently working with some of the top NBA and WNBA talent in the league. He also continues to work with high school and colleges athletes of all sports as they aspire to reach the professional levels.