Young Athletes: Are Power Cleans with an Efficient Use of Our Time? 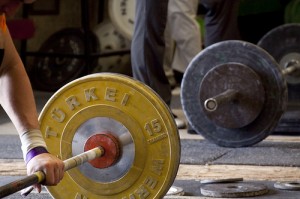 There is a great deal of anecdotal evidence and personal experience that comes into play when strength and conditioning coaches select strength training exercises, speed drills or conditioning routines for young athletes. The risk vs. reward scale is a great place to start, but not the only factor that should be considered. As a professional, I believe it is my ethical responsibility to prescribe safe exercises. But, according to the thought processes I’ve been hearing lately, it seems like a lot of people believe there are no bad exercises, just bad implementation. I understand the point to a degree, but I disagree. Risk vs. reward is one reason I feel this way, but there is another factor I weigh when making decisions.

Another ethical responsibility I think we all have is to implement “efficient” programs, and that is something I see missing more often than not. What I mean by that is that I think a lot of trainers waste time and energy doing things that won’t necessarily elicit the response with the young athletes that they’re after. I can see where someone may think “well, it might help, so I’ll implement it a little.” I can see that, but I hate to see coaches spending an inordinate amount of time on things that we’re not sure work better than other alternatives.

Let’s take the Power Clean as an example. Olympic lifting is a sport. There is a governing body and athletes compete against one another in the lifts. It’s possible that the lifts develop power, but it has never been shown that they develop power better than other alternatives. In my opinion, some of the alternatives such as dumbbell/trap bar squat jumps, pulls, DB pulls, and plyometrics are also much easier to teach and are much safer to implement and will elicit the same result. I’ve heard many coaches talk about how the catch is the most critical part of the clean to work on because that’s where the problems will be seen. The catch is also completely unnecessary, from a physiological standpoint, for developing power. Yet, as strength coaches, our romantic enchantment with the exercise keeps us doing it.

You’d think that if the exercise was SO great for young athletes that the rewards completely outweighed the risks, we’d have plenty of research showing just that. We don’t. We don’t have anything. It’s simply not out there.

Now, it might develop power. Let’s put that aside and think about whether or not it is efficient? How long does it take to get an athlete good enough at the lifts that they can actually derive the benefits? How much coaching and supervision does it take compared to, say, a squat jump? How safely will it be done when we’re not around or another coach is supervising? How many sets and reps are required to 1. Become proficient and 2. Get more powerful? We don’t know. And, is moving a bar with heavier weight even going to transfer to sport?

Hmmm. Again, we have no idea. What I do know are many professional strength coaches who tell me it takes them months to get their young athletes proficient enough at the clean that they no longer require daily instruction.

The principle of specificity states that in order for one skill to transfer to another, they need to be kinetically and kinematically the same for transfer to occur. The clean has been shown by Canavan to be dissimilar to a vertical jump, which is what is commonly argued as the movement it is most like. If it’s not like a VJ, then it’s nowhere near any other sport movement. So, is the transfer gone? I don’t know, but this principle seems to point in that direction. The principle also states that if x gets you better at y, then y should get you better at x. Playing a sport or practicing jumping does not make you better at the clean, so why do we expect the clean to get us better at a sport?

So, if we have no idea if it’s going to help us in sport, it takes a lot of time and energy to coach and implement, and it can be dangerous if done with slightly poor technique, is it an efficient way to spend our young athlete’s time? I have an opinion, but I don’t know the answer. I can kind of understand the argument that it helps prepare for sport, but is it efficient?

What I do know, is that gymnasts are incredibly powerful, flexible, and have great core strength and balance. So, should we all go through certifications for gymnastics and start implementing them with other young athletes because we want them to have all of those things? I would say that would be a poor use of our time. I know that jugglers have amazing hand-eye coordination. Should we implement juggling into our programs because we want our athletes to have that kind of coordination? Again, probably a waste of our time. So, why do we train for one sport to get better at another?

So, forget about whether the clean is safe or not. There are plenty of arguments either way. But, is it efficient?

Is it the best use of our time with young athletes?

Do we know, beyond a shadow of a doubt, that it is the best use of our time? In my opinion, if we can get the same result in half the time, why not use that option? I use the same thought process when determining workout volume. If I can get the same results in 45 minutes, 3 days a week, why would I ask my young athletes to train 2 hours a day, 4 days a week? But, many coaches do. I think it’s our responsibility to figure out how to maximize results in minimal time. Most young athletes are not professional strength athletes. They want to play their sport and should spend their time doing so. We should be with them the minimum amount of time possible and still get results. It’s like a prescription drug. A doctor is supposed to find the lowest dosage possible to get the desired response. As strength and conditioning professionals, I believe we should take the same approach when determining which exercises to include in our programs.