“Coach, can we play Power Ball?”

I was a strength and conditioning coach for a High School football team, and the reward of 10 minutes of a chase -and- evade game with a tennis ball could get my players to do just about anything during training.

This is despite the fact that this particular game, with elements of soccer and rugby, required everyone on the field, including linemen, to run constantly. 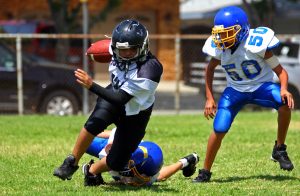 As a performance coach, you have undoubtedly witnessed this phenomena  working with athletes and non-athletes from kids to adults.

The miracle of “gamifying” has now extended from athletics to the fitness industry and beyond.  Corporations are now paying a kings ransom to organizations that can help teach business concepts through interactive games.

So why are games and other forms of play so effective for teaching, developing, and reinforcing concepts of performance and competition?

In the world of sports, coaches and athletes are actually immersed in the world of play.  After all, athletic competition has been embraced for centuries as what Stuart Brown M.D., Author of Play and founder of the National Institute of Play, refers to as “War play”.

Prior to sports being widely embraced, competition among individuals most often took on the form of war or battle.  Societies discovered that from the demands of war, certain positive aspects were developed among individuals and groups.  To decrease the “cost” of developing such aspects, non lethal ways of competing were developed.

Additionally, “play” behavior appears to be in our DNA, as well as in organisms as simple as insects. Scientists believe this tendency has evolved to allow species a physical and emotional outlet, allowing for greater social and cognitive development.

While sports once served as a play-based, “release” for the tensions otherwise associated with war, our kids are often placed under increasing pressure to perform athletically  at younger and younger ages.  Instead of an outlet, athletic performance is becoming the currency that stratifies many life opportunities for youngsters.

Play has become work for many children.

The rigors of athletic preparation are a tremendous tool for developing traits of teamwork, commitment, resiliency, and tactical proficiency.  However, by letting our athletes “play” within the confines of training, we can facilitate motivation, creativity, and camaraderie, in addition to other coaching “intangibles”.

These intangibles culminate to create an athlete’s individual desire to not only compete at a high level, but continue competing.  Looking at various research and the available data, it appears the number one determining factor in long term athletic success is most highly correlated with a child’s overall enjoyment with an activity.

Consider as well children who are not athletically inclined.  The physical benchmarks naturally established by sports and regimented athletic preparation remind them daily of their ineptitude.  Unsurprisingly, these kids often abandon physical activity altogether and contribute to the statistic suggesting nearly 1/3 of our countries children are obese.  For these kids, play-based activities often strip the status quo of athletics and allow them to explore endless opportunities to be active.

Aside from the “obvious” advantageous offered by infusing novel games and activities into an athletic preparation or physical activity program, consider the underlying neuromuscular mechanisms below that make play so powerful.

Development of the “Perceptual Motor Skills”

The ability for our senses to perceive, send a message to the brain, and have the brain create the appropriate response is the true underlying foundation for athletic, cognitive, and even social development.

As humans, we depend on input from a variety of senses to inform our physical, mental, and emotional decisions. These sensory skills, or “perceptual motor skills” create an important link between our body and brain.

Consider the following perceptual skills that help make up our ability to move and learn effectively:

Body Awareness:  Understanding the parts of the body and various ways they can move.

Directional Awareness: The ability to understand the directions of the body (right, left, up, down, etc.) and to be able to move in all planes of motion.

Spatial Awareness:  A concept of how much space the body occupies in relation to the surrounding environment.

Temporal Awareness:  The sense of timing, rhythm, and precision.

Vestibular Awareness:  An internal sense of the head and body’s position in relation to gravity.

Proprioceptive Awareness: The ability to interpret the internal sense of where the body and specific joints are in space and in relation to each other, and how much force/velocity they are exerting.

Tactile Awareness: The ability to appropriately respond to touch, in addition to differentiation of objects by size, texture, and shape.

Visual Awareness:  The ability to visually focus, track, and take in broad fields of view.

Auditory Awareness: The ability to accurately interpret and respond to sound.

When these skills are in tune, the “perceive- relay- respond” mechanism is optimized, allowing for improved overall physical and cognitive performance.

We begin developing these skills in infancy and continue throughout life.  While different sensory skills develop at different rates, research suggests a “sensory rich environment” not only helps fully develop these skills, it accelerates the process.

Consider how broad development of the sensory skills intertwines with play and performance in youth sports. 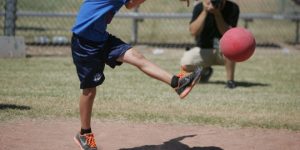 When children filled their time with unstructured play and multi-sport participation, every aspect of their sensory system was developed as they rolled down hills, threw baseballs, dribbled basketballs, kicked kickballs, and participated in any number of novel activities on a daily basis.

Currently, data suggests that a growing number of children are narrowing the physical activities they participate in on a daily basis.  They either are inactive, favoring video games over unstructured play, or they are funneled into early sport specialization.

Both of the above situations result in confining the sensory rich environment required to fully develop the perceptual motor skills of learning and athleticism. Novel games and activities during practice, training, or exercise sessions can help combat this trend, broadening the sensory skills these children have the opportunity to develop.

Consider an 8- year- old baseball player that has been convinced (against your advice as a development coach)  to forgo other sports in favor of year-round baseball.  Within the baseball environment, this child will practice and hone a small set of sensory skills.  While this can help baseball performance at a young age, a more broad spectrum of skills will be required to perform at a high level at an older age.

Facilitating targeted activities and games that require these children to use the senses outside of the small set required for baseball can help create an environment that optimizes overall development.

Pro sports are full of athletes attributing their on-field success to activities outside of their primary sport.  Dance, martial arts, gymnastics, and other surprising activities during their youth are often credited for shaping the unique athletic ability they ultimately developed.

It’s obvious that aside from an outlet from the demands and expectations from their “money” sport, these activities helped develop the underlying sensory skills that allowed them to become adaptable, resilient, and proficient.

As you can see, facilitating play within practice and training is a powerful tool to fully develop and engage the youngsters you work with.  In part 2 of this article, discover a framework to quickly and easily gamify drills and other activities to supercharge your training sessions! 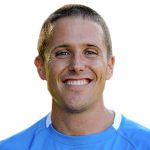 Brett Klika CSCS is the Co-founder and CEO of SPIDERfit Kids and an international expert in the area of youth development.  He has spent many years working with Todd Durkin at Fitness Quest 10 in San Diego, CA and was named the 2013 IDEA Personal Trainer of the Year.

The IYCA’s Game Play Performance by Dave Gleason and Dave Jack gives you the tools to easily gamify your drills. 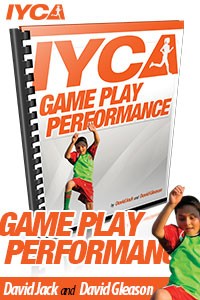